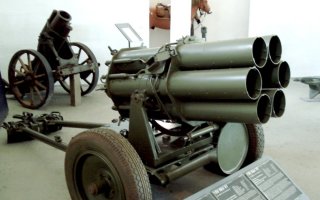 Here's What You Need to Know: These big guns were not to be trifled with.

During the Second World War, it wasn’t just the aircraft that delivered devastating blows to the enemy. As the Allies sought to liberate Western Europe from Nazi Germany both sides engaged in artillery exchanges that proved as devastating and as destructive as the bombs dropped from above.

Artillery, from mortars to howitzers, was also one area where Germany may have had a slight advantage, but both sides had a range of weapons that allowed them to pound their enemy.

This was the most numerous howitzer used by the Germans in World War II. It was adopted for service in 1935 and used by all divisions and artillery battalions. More than 22,000 were produced, and it was the standard divisional field howitzer. It wasn’t suited to anti-tank combat, but was used to good effect in that role in North Africa and even on the Eastern Front.

This was the basic Germany heavy howitzer of World War II, and it was noted for its mobility and firing range—a total of 6,756 were produced during the war. It was the first artillery weapon equipped with rocket-assisted ammunition, which increased the range.

The 15cm Nebelwerfer was technically a tripod-mounted, multi-barreled rocket launcher. This weapon had a maximum range of 7km, and could fire six rockets in ten seconds, and Allied troops nicknamed it the “Screaming Mimi” due to its distinctive sound.

Simply put this was one of the most effective artillery pieces in the war. Developed in the 1930s as an anti-aircraft gun it offered a high rate of fire—and had an effective ceiling of 8km, and a maximum range of nearly 15km! Due to a shortage of anti-tank weapons the 88 as it was called for use in that role.

The 88mm gun was widely dispersed throughout Normandy and could shell targets on the various beaches, which is why taking these out was a prime objective on D-Day.

One of the challenges in using the 88 as an anti-tank weapon was in its transport. The Krupp Factory, which built the weapon, received requests from the German military to produce the anti-aircraft gun but in an anti-tank role. The result was the Pak 43, which included a shield and two steel wheels.

The gun was also fitted with a semi-automatic vertical breech mechanism to reduce recoil, while it was also redesigned to be fired electrically while on its wheels. It had a flat trajectory out to 914 meters, which made it easier for the gunner to hit targets at longer ranges.

The 88 was considered among the best anti-tank weapons but its size was an issue. The 7.5cm Pak 40 was also designed from the ground up as an anti-tank weapon and was capable of piercing 120mm armor at a distance of a kilometer! It offered a high rate of fire—fourteen shells per minute, making it an effective weapon to stop enemy tanks.

The United States military modernized is artillery focus in the interwar era and the M114, a 155mm howitzer, was developed just in time for its entry into the Second World War. This gun, which was developed and built at the Rock Island Arsenal, could fire just four rounds a minute, but had a range of nearly 15km. It could fire explosive, smoke, illuminating and even chemical shells. So successful was this design that it remains in use to this day.

When it came to small artillery the Germans had some of the best including its 8 cm Granatwerfer 34 Mortar, which was capable of firing explosive shells and smoke bombs up to a kilometer. It had a maximum rate of fire of fifteen-to-twenty-five rounds per minute, and the range could be extended by fitting up to three powder charges between the shell tailfins.

Based on the French Brandt mortar the American M1 81mm mortar was used throughout World War II and saw use in all theaters of the war. It could fire explosive and incendiary shells as well as smoke bombs and illumination rounds. It could fire up to eighteen shells per minute and had a maximum range of 3,000 meters.

American designers sought to improve upon the 81mm M1 Mortar by reducing the weight and size, which allowed for easier use by infantry and airborne units. The latter used it to great effect in Normandy as it provided a way for paratroopers to pack some artillery punch.

Like the M1 mortar, the M2 could fire eighteen shells per minute, but it was limited to a range of just 1,815 meters. Still, it was effective and accurate and remained in use throughout the Vietnam War.

Developed as a light anti-aircraft gun that was used on all fronts by the Germans during World War II, the 2cm FlaK 38 was deployed in both single mounting and quad mounting configurations. It was also deployed as an anti-tank and even anti-personnel role. In the film Saving Private Ryan a 2cm FlaK 38 gun was seen in the final battle at Ramelle.