Meet the He 162: Hitler's Flawed Wooden Jet (Flown by Teenagers) 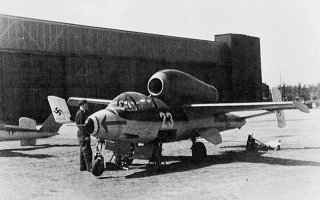 Key Point: The He 162 was an elegant little design with some serious shortcomings.

However, the Volksjäger’s flaws were inextricably tied to the fact it was one of the last gasps of a murderous regime ready to throw away the lives of unwilling slaves and patriotic youth alike in a desperate effort to escape a doom of its own making.