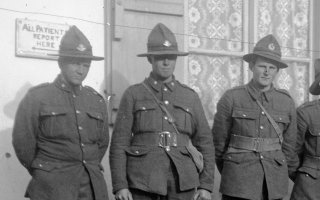 Here's What You Need to Know: The hat remained in use in the New Zealand military until 1960

When the first New Zealand units arrived on the Gallipoli peninsula during the First World War they were easy to spot as they were the only ones wearing a unique campaign hat—known to some as the “Lemon Squeezer” due to its iconic shape. Since the First World War this hat has been linked to the Kiwi soldier, and while less well-known than the iconic Australian slouch hat, the campaign hat was worn on the beaches of Gallipoli in Turkey, and then a generation later in the deserts of North Africa.

The felt hat, which closely resembles the American campaign hat, has lived on with both civilians and as a form of military headdress. It was most commonly seen with four “dents” that give the hat its unique shape, and this inspired the term Lemon Squeezer, despite the fact the New Zealand Military Forces never officially used that term. When it was introduced it was referred to as the “Baden Powell” hat, or just simply a campaign hat.

What is even murkier is who exactly should be credited with introducing the hat—and numerous sources credit William George Malone, an officer in the New Zealand Military Forces, who issued the hat to soldiers serving under his command in the 4th Battalion of the Wellington (Taranaki) Rifle Volunteers. The same published sources suggest that Malone’s unit adopted the hat as a way to mirror the outline of Mount Taranaki on New Zealand’s north island.

However, other sources suggest this is more legend and myth than actual fact. It is worth noting of course that the hat resembles the “Montana Peaked cap” or “Campaign Hat” that the United States Army adopted following the Spanish American War. While short lived as standard cover for the U.S. military, the basic pattern lives on today where it is used exclusively by drill instructors in the U.S. Army and United States Marine Corps.

Across the Pacific Ocean members of the Legion of Frontiersmen and the scout movement—similar to the United States Boy Scouts—adopted a similar peaked felt hat. It is unclear if there is a connection in how the groups both adopted such analogous headgear, but the peaked hat simply is functional, practical and stylish. It offered adequate protection from the elements by allowing rain to run off easily while also helping shield the sun as well.

The Peaked Hat Goes to War

During the latter half of the 19th century New Zealand did not have an actual “army” but instead had a number of local militias. Various forms of headgear, most likely based on those of the British Army as well as colonial forces, were adopted. By the end of the century, some militias, notably mounted units, adopted various patterns of felt hats.

In 1891 the whole of the nation’s mounted rifles adopted the felt hat to replace other forms of headdress, and this version was worn with crown creased fore and aft and the brim turned up on one side—much like the Australian slouch hat. The General Regulations of the Defence Forces of New Zealand 1906 called for these hats to be of thick felt in a khaki color, and this was to be worn by all branches of the military, except for Officers of the Cadet Companies.With this the hats became more standardized, with regulations indicating that hooks were to be provided for the brim to be turned, yet descriptions were not made as to how the crown was to be worn.

Thus, various felt hats were still being worn as the first Kiwi soldiers went off the Boer War in South Africa (1899 to 1902). It was in this conflict that the slouch hat was used by numerous units including the Victoria Mounted Rifles and New South Wales Lancers of Australia; the British Imperial Yeomanry and Bethune’s Mounted Infantry among others.

It is reported that it was during this time that New Zealanders may have seen the style of hats worn by the Canadian troops also serving in South Africa, and those soldiers wore hats similar to what we associate with that of the Royal Canadian Mounted Police (or “Mounties”). It is believed some of the New Zealand troopers altered the standard fore and aft style to one that created a peaked crown, while also opted to wear the brim flat all the way around. There is no indication that this followed any regulations, but rather that this was done “ad hoc” in the field.

Regardless, this may have been the birth of what would eventually become the “Lemon Squeezer” in spirit, even if not in name. During the subsequent “volunteer” period of 1902 to 1910, the felt hat became the standard form of headdress for military units in New Zealand. These hats were reportedly made by the Union Felt Hat Company.

In December 1909, the New Zealand Defence Act was passed by the nation’s parliament, and this saw the introduction of a country-wide, government-run Territorial Force system that replaced the locally run volunteer militia units.

The first reference to the campaign style hat appeared in New Zealand Military Forces Dress Regulations of 1912, which mention a “Baden Powell” hat. The hat was addressed again in the following Regulations for the Military Forces of the Dominion of New Zealand 1913, which noted that the felt hat was only to be worn as part of the full-dress uniform. An exception to this was allowed so that the felt hat could be worn for field work as protection from the sun. More importantly, even at this time the dress regulations for the Territorial Army said that the felt hat was to be worn with the crown creased fore and aft, while the left brim was to be turned up and held up by a cord that attached to a badge with a hook. This particular hat was made from a grey felt with a high crown and narrow brim.

It wasn’t exactly embraced by many. A report in the Auckland Star in February 1913, suggested that the Territorials’ hat “held little appeal, was too much like a civilian hat of the time and was not very soldierly in appearance.” Soldiers also disliked the hat, and by 1913 some units were beginning to modify it back to the peaked hat that had become iconic with the New Zealanders during the Boer War.

It has also been reported that this version of the peaked hat was adopted by the Wellington Regiment—but what role the aforementioned Malone played still is shrouded in some mystery. It is known that the entire New Zealand Infantry Division adopted the hat on January 1, 1916—by which time the unit had seen its baptism of fire at the Battle of Gallipoli. However, many of the first ANZAC (Australian and New Zealand Army Corps) to arrive at Gallipoli were issued with service dress caps, so it is likely that the peaked cap (or Lemon Squeezer) showed up after the first units had already dug in!

By September 1916 the felt hat with a peaked crown was finally and officially accepted as the headdress of the New Zealand Expeditionary Force. That hat was worn by Kiwi soldiers who served at Gallipoli, then by units of the ANZAC Mounted Division in the Sinai and Palestine Campaign against the Turks and even by some units serving on the Western Front—where it was generally worn only when those soldiers were rotated out of the front lines.

After the war ended the peaked hat had become as iconic with the New Zealanders as the slouch hat was to the Australians, and it saw limited use in the field during the Second World War. Throughout its use in addition to badge insignia, the different branches of service were differentiated by colored puggarees around the base of the crown. These include blue and red for artillery, khaki and green for mounted rifles, khaki and red for infantry, blue for engineers, yellow for Pay Corps, khaki and white for Army Service Corps, cherry-red for the Medical Corps and maroon for the Veterinary Corps.

During World War II it was largely replaced by forage caps and berets, but remained in use in the post-war New Zealand Army until 1960. Only in 1977 was it reintroduced for ceremonial dress, and while it remains in use among Officer Cadets as well as members of the New Zealand Army Band, in 2012 it was announced that it would replaced by the “Mounted Rifles Hat,” a form of headdress that resembles the Australian slouch hat. The “Lemon Squeezer” has been retained only for other use by honor guards and on “special occasions.”