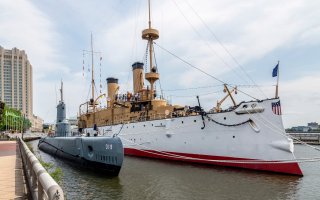 Here's What You Need to Know: The USS Olympia has her issues, but her place in naval history is secure.

The oldest steel warship afloat has survived wars, economic downturns and even the harsh passage of time, but there was one battle that the USS Olympia (C-6), flagship of the American Asiatic Fleet during the Spanish-American War (1898), almost was unable to win. The future of the ship remained very much in jeopardy for several years due to the rising costs of maintaining the protected cruiser.

Today the Olympia is at home at the Independence Seaport Museum on the Delaware River near downtown Philadelphia, where it has been since 1957. Interim repairs were made on the ship over the years but following some mismanagement at the museum, there hasn’t been the money for a much needed full restoration. As a result, for a while, it looked like the once majestic vessel would meet a fate that no great warship deserves. She would be sunk and converted to an artificial reef!

The Modernization of the U.S. Navy

The USS Olympia was launched in 1892 as part of American efforts to modernize its navy and to have a military presence in the Pacific Ocean. The Olympia, under Commodore George Dewey steamed into Manila Bay on May 1, 1898, to engage the Spanish Navy at the start of the Spanish-American War. It was from Olympia’s bridge that Dewey made his famous command to the ship’s captain, “You may fire when you are ready, Gridely.”

Those words might have never have been said and the (now) apparent one-sidedness of the battle not been so had it not been for a sudden American interest in overseas trade—and to a lesser extent an overseas “empire.” William Henry Seward, who had been secretary of state during the American Civil War and early reconstruction, had made the proclamation that “the empire of the seas alone is real empire.”

This was not to be another “Seward’s folly” but rather a prophecy that would very soon come to pass, as America joined the European powers in looking to a newly opened Asia with trade opportunities in mind, while backing it with the very nineteenth-century notion of “gunboat diplomacy.” To pull that off, however, required real gunboats and American’s obsolescent Civil War-era fleet of the 1860s was certainly no match for the modern British or French naval squadrons.

When President James A. Garfield took office in 1881, the new Secretary of the Navy William H. Hunt found that of the 140 vessels on the active list only fifty-two were actually in an operational state, and only seventeen of those were even iron-hulled ships. In fact, fourteen of those seventeen ships were aging Civil War-style ironclads. Most military historians agree that at the time the United States would have been incapable of fighting a naval war with a European power and probably would have faced difficulties with many of the Latin American powers such as Peru or Chile! If the United States was to be a player in world trade, it needed a world-class navy.

In March 1883, the United States Congress appropriated $1.3 million for the construction of four new vessels known as the “ABCDs”—Atlanta, Boston, Chicago, and Dolphin. Unlike the ironclad warships of the Civil War, these were to be fabricated not from wood and iron but steel. It would truly be a first-rate, modern navy.

The ABCD experiment was followed by the next step in naval modernization, which included the construction of the battleships Texas and Maine; as well as six-light, or so-called “protected,” cruisers. These cruisers would feature an armored deck but still be able to maintain an impressive speed faster than most warships of the day. Protected cruisers actually formed a new category that fell between the unprotected versions of the warships with no armor and those later stylized as “armored cruisers” that were almost as heavily armored as true battleships of the era.

These efforts to modernize the navy paid off. By 1889 the United States Navy ranked second only to Great Britain in terms of warships that could exceed 19-knot speeds while displacing 3,000 tons or more. The British had a total of ten ships and a total of 56,000 tons, while America’s eight ships displaced 32,010 tons. That exceeded the French Navy’s five ships and 24,630 tons and notably Spain’s three ships and 14,400 tons.

More importantly, this was a paradigm shift from the “commerce destroyer” type of ships that were used during the American Civil War to a fleet that had a true offensive spirit.

The Olympia actually began life as Cruiser Number 6, a 20-knot warship that was designed to cost no more than $1,800,000. The newly formed Board on the Design of Ships (originally the “Board on Construction”) first began the design process in 1889, and less than a year later the navy solicited bids for the construction of the ship. Yet it actually found only a single bidder, the Union Iron Works in San Francisco—where it remained the largest ship ever built on the western coast of the United States until it was surpassed by the construction of the battleship Oregon a few years later.

The keel of Cruiser Number 6 was laid in June 1891 and the ship was launched in November 1892. While the primary construction occurred in San Francisco, the heavy armor plate was constructed back east. The Bethlehem Steel Company of Bethlehem, Pennsylvania, was tasked to provide the steel but ran into difficulties, so Andrew Carnegie’s Carnegie Steel Company was called in to help provide the material for the ship’s armor.

In December 1891 sea trials were conducted in the Santa Barbara Channel, and in February 1895 the ship was commissioned the USS Olympia and departed the Union Iron Works yard in San Francisco for the last time. It steamed to the U.S. Navy’s Mare Island Naval Shipyard at Vallejo for outfitting.

It was in April 1895 that the ship conducted its first gunnery practice, and sadly it was during this shakedown that a crew member was killed. Coxswain John Jonson lost his life in an accident while firing one of the 5-inch guns. Fortunately, it was not a portent of things to come.

In July 1895 the Olympia was assigned to replace the USS Baltimore as the flagship of the Asiatic Squadron, and it departed in August of that year for Chinese waters. However, due to an outbreak of cholera amongst the crew, the ship was forced to remain in Hawaii until October, and didn’t arrive in Shanghai until November.

She spent three mostly peaceful years in the Far Eastern waters, where Olympia made visits to British Hong Kong, Kobe and Nagasaki in Japan; performed humanitarian service at Woosung in China when two steamers collided and needed assistance; and even headed to Vladivostok in Russia for the coronation celebrations of Czar Nicholas II. During this time the crew’s baseball team even played against a Japanese team, with the Americans coming out on top in this unofficial “world series.”

On January 3, 1898, Commodore George Dewey raised his flag on Olympia and assumed command of the U.S. Navy’s Asiatic Squadron. Dewey, along with the newly assigned Captain Charles Vernon Gridley, was about to sail into history.

From Manila Bay to Philadelphia

Tensions had been simmering between the United States and Spain for nearly a decade over the latter’s rule of Cuba, which sought independence from the mother country. The USS Maine, which had been sent to Havana, Cuba by President William McKinley to ensure the safety of American citizens and interests, suffered a sudden and massive explosion on February 15, 1898. While McKinley tried to preach patience—especially as the cause of the explosion was not known and there was no evidence of an attack—the news of the event stirred popular opinion, and by the end of April the United States was at war with Spain.

The Olympia had been in Hong Kong preparing for action, and following the declaration of war, the Asiatic Squadron was ordered to Manila. Dewey was given the order to sink or capture the Spanish fleet and open the way for a subsequent invasion by American forces.

Dewey, in command aboard the Olympia, steamed into Manila Bay on May 1, 1898, to face the Spanish flotilla commanded by Rear Admiral Patricio Montojo y Pasarón. Montojo had anchored his ships close to the shore and under the protection of coastal artillery. However, the shore batteries along with the fleet were to prove no match for Dewey’s squadron.

Dewey must have felt confident, for while desks and cabinets were ordered to be removed from the ship—as these could create splinters and endanger the crew should it take a direct hit—the Commodore opted not to have the fine wooden paneling inside the ship removed. The ornate panels were part of the ship’s opulence and thus were spared.

While largely considered a one-sided affair, especially as the Spanish gunners were unprepared for action, the shooting from both sides could best be considered rather poor. At one point Dewey withdrew when it was erroneously reported that the ship was running low on 5-pound shells. When it was discovered that the ship’s ordnance supplies were high the attack continued, and by early afternoon Dewey had virtually destroyed Montojo’s squadron along with the shore batteries, while the American ships took little damage. In total some 160 Spanish sailors died, while just a single American sailor lost his life during the battle—and that was reportedly due to sunstroke.