The "Merit Myth" Around Female Leaders 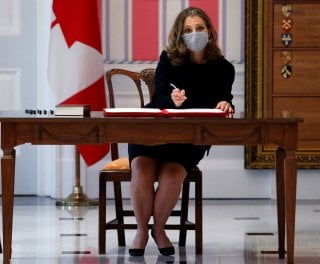 Chrystia Freeland made history by becoming Canada’s first woman finance minister. The next day, she experienced what many high-achieving women do: her qualifications for the job were immediately challenged.

Journalists reported that Freeland lacked the Bay Street experience of her predecessor, Bill Morneau, that her “mastery of business issues was relatively untested” and that she was merely a journalist with no business credentials.

Such reporting ignores Freeland’s stellar performance in two cabinet posts over five years and overlooks the fact that she was an award-winning financial journalist before entering politics. For some, Freeland’s qualifications for finance minister were insufficient.

We shouldn’t be surprised. Denigrating or ignoring women’s credentials is a common strategy to reinforce ideas about who is entitled to the most powerful positions in our society. My co-authored book, Cabinets, Ministers, and Gender, shows that downplaying women’s qualifications helps explain why so few make it into top government posts.

Women were entirely absent from Canadian cabinets until 1957, when Ellen Fairclough was appointed to cabinet by prime minister John Diefenbaker. Since then, progress has been slow, and few women have held the most powerful posts. Just three women have served as justice minister, two have led foreign affairs and just one woman, Kim Campbell, has been defence minister, a post she held for less than six months.

Women’s gains in politics and the workplace over the past few decades are undeniable. Yet men continue to dominate the upper echelons of politics. Why? Our research digs into how qualifications and arguments about merit are deployed to women’s disadvantage.

There are no formal qualifications for ministers in the countries we studied — Australia, Canada, Chile, Germany, Spain, the United Kingdom and the United States. We interviewed former ministers and political advisers, read former leaders’ memoirs and dug into media archives to figure out why some people make it into cabinet and others don’t.

We found that even without written rules, there were still widely recognized expectations about the qualifications ministers needed. Political experience and policy expertise were central, but we found that friendship and loyalty mattered even more, especially to the person doing the appointing.

Women have a harder time qualifying on these grounds. That’s because the networks where political friendships develop often originate in all-male or mostly male spaces like private school, fraternities and golf clubs. Examples include former British prime minister David Cameron’s “Notting Hill set,” many of whom sat in his cabinet.

The Route to Cabinet

Another route to cabinet is having policy expertise, educational credentials and professional experience related to the post. Unfortunately, patterns of gender segregation in the workforce get reproduced in cabinet. Researchers find that women tend to be appointed to less prestigious cabinet posts that correspond to stereotypically feminine professions like education, social services and health.

If qualifying for more powerful posts like finance, defence and foreign affairs requires occupational experience, women will be disadvantaged. Women lead a mere 7.4 per cent of Fortune 500 companies and continue to be vastly under-represented in the Armed Forces. The high-profile cabinet spot where women are most likely to be found is justice, which is unsurprising given the ever-growing number of women graduating with law degrees.

But the real reason why criteria requiring occupational experience undermines women’s chances of making it to cabinet are the ones exemplified by the reaction to Freeland’s appointment: qualifications are in the eye of the beholder. They’re not objective, and they’re not static. They shift and change depending on who’s being considered and who’s doing the judging.

While doing research for our book, we encountered several cases of women’s qualifications for cabinet being ignored or downplayed. The most egregious — and sadly similar to Freeland — is when Theresa May, former British prime minister, was selected by newly elected prime minister David Cameron as home secretary, one of the most powerful posts in government. May had been in parliament for 13 years, served as party chairman, and shadowed six different portfolios. Yet the media still challenged her qualifications for the position.

Merit as a Strategic Tool

When Trudeau first appointed a gender-balanced cabinet in 2015, the satirical Beaverton ran the headline: “50 per cent female cabinet appointments lead to 5,000 per cent increase in guys who suddenly care about merit in cabinet.” The headline illustrates how merit arguments are deployed precisely when women’s gains threaten the status quo.

Journalists who ignore Freeland’s qualifications or imply — contrary to the historical record — that Bay Street experience is a qualification for finance minister, are doing the same thing, except they’re not trying to be funny.

Instead, they’re sending an all-too-familiar message to women seeking high office: No matter what you accomplish, it will never be enough.