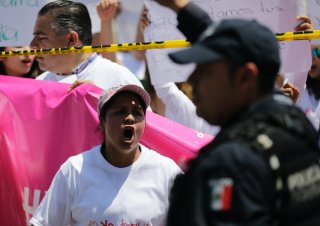 Domestic violence has spiked in Mexico during its coronavirus-related lockdown. According to a national network of women’s shelters, calls for help were up 60% in April.

Even before the pandemic, however, women in Mexico felt under siege. In one of the world’s most violent countries, women are raped, murdered and kidnapped with stunning frequency, and the problem is growing.

When I first began teaching gender violence in my Latin American studies classes in 2018, Mexico saw seven femicides – the legal term for the murder of a woman – a day. This year, on average, 10 Mexican women are murdered every day.

Midmonth, 25-year-old Ingrid Escamilla was murdered, skinned and partially disemboweled. Her mutilated body became a public spectacle after police who responded at the scene leaked pictures that the media reproduced. Days later, seven-year-old Fátima Aldrighett – kidnapped while waiting for her mother to pick her up from school – was found naked in a plastic bag. Police identified signs of sexual abuse and torture.

While surveillance video resulted in the arrest of two people for Aldrighett’s case, Escamilla’s killing remains unsolved – a common outcome of murder investigations in Mexico.

After the two gruesome killings in one week, President Andres Manuel López Obrador blamed violence against women on the neoliberal policies of his right-wing predecessors and dismissed Mexico’s growing feminist movement as a plot orchestrated by his right-wing opposition.

The Mexican government’s dismissive response to femicides sparked intense criticism from feminists, and in March López Obrador’s administration unveiled a comprehensive plan to protect Mexican women. It promised to reopen government-funded domestic violence shelters and daycare facilities that were shuttered due to budget cuts last year and launch a smartphone app to report street harassment.

A day without women

Despite the proposal, on March 8, International Women’s Day, an estimated 80,000 to 120,000 women (according to official data, although feminist groups argue this number was closer to 120,000) marched in Mexico City and nationwide to demand that the government implement policies to protect women, take femicide investigations seriously and bring justice for victims and their families.

I am a scholar of gender and sexuality in Latin America, and the protest’s goals reminded me of the work of anthropologist Rita Segato, who insists that femicides cannot be seen as the act of lone, sick individuals. Rather, Segato says, women’s murders result from a larger system of oppression and control over women’s bodies.

Mexico’s feminist mobilizations continued the next day, March 9, with a women’s strike called “A Day Without Us.” Despite some criticism of the strike as an elite initiative accessible only to those who can afford to stay home from work, pictures circulated online of half-empty classrooms, subways and streets across the nation.

Within two weeks of the back-to-back feminist protests, Mexico would begin closing down as a result of the coronavirus pandemic. The nation’s attention would turn, understandably, away from women’s killings and toward public health. More than 8,000 people in Mexico have since died of COVID-19.

But femicides are a major public health problem for Mexico, too – one that will outlast the pandemic. According to the government, 367 women were killed between mid-March and mid-April, the first month of social distancing. Last spring, there were about 300 femicides a month.

Several of Mexico’s recent victims were girls, such as 13-year-old Ana Paola, who was raped and murdered inside her northern Mexico home on April 2.

When I teach about Mexico’s femicides problem, I talk to my students about misogyny. I use that word not in its common sense, to mean hatred of women, but rather in the way author Kate Manne defines it in her 2017 book “Down Girl: The Logic of Misogyny.”

For Manne, misogyny is the “policing of women’s subordination” in patriarchal societies – the way people condemn women who don’t adhere to social expectations. This instinct has been on display in Mexico, taking the form of a backlash against feminists’ efforts to put gender violence higher on the public agenda.

A December 2019 case involving Karen Espíndola is a good example of how this social misogyny works. Espíndola, a 30-year-old woman from Mexico City, texted her mother late one night about feeling unsafe in a cab. When she didn’t arrive home, her brother posted her texts online. Concerned she’d been kidnapped, people across Mexico mobilized to find her.

Espíndola, it turns out, was fine. She had simply wanted to stay longer at a party, texted her mother to buy some time, then switched off her phone.

Though Espíndola apologized for unintentionally setting off a social media manhunt, she received death threats. The media played surveillance footage from a bar in which Espíndola appeared drinking with men, feeding a narrative that her public behavior was inappropriate. Twitter deemed her #KarenMentirosa – #LyingKaren.

Espíndola eventually went on national TV to beg forgiveness for partying, for hanging out with men. In short, she apologized for not having been kidnapped.

President López Obrador likewise continues to downplay the problem of violence against women, claiming without factual basis that “90%” of calls to domestic abuse hotlines are fake.“ But other members of his administration appear to be taking the issue more seriously.

"We have a patriarchal system,” said Mexican Secretary of the Interior Olga Sánchez Cordero on May 20, confirming the administration’s commitment to study Mexico’s gender violence problem and propose concrete, actionable solutions.

On May 26, Sánchez Cordero’s office released its report, which said Mexican authorities had lacked coordination in femicide investigations and promised to restructure how various federal agencies work together to solve these crimes.

Later that same day, the government launched a public awareness campaign about domestic violence. Its concrete, actionable solution for femicides? Advising men who feel angry to breathe deep and “count to 10.”