Mexico’s War on Drugs Has Been a Huge Disaster 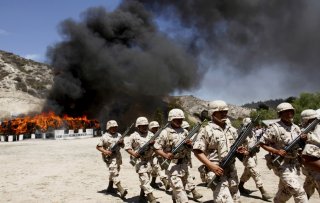 US security assistance to Latin America is under scrutiny. Nowhere is this more apparent than in Mexico, where the recent arrest on corruption charges of former Defense Minister General Salvador Cienfuegos heralded the near death of institutionalized security cooperation with America’s southern neighbor. The arrest engendered several weeks of well-worn variants of the storyline that the so-called “War on Drugs” has been an unmitigated failure.

However, the newly-released report of the Western Hemisphere Drug Policy Commission, an in-depth look at US security assistance programs over the past two decades, offers plenty of reasons to question this hackneyed narrative. True, the report conveys all of the frustrations and shortcomings well known to any informed observer or policymaker. Yet its findings portray Mexico as a country committed to and moving forward with a number of critical reforms — albeit highly unevenly and often below the radar. The fact that US-Mexico security cooperation has weathered three Mexican presidents, running the gamut from the conservative Felipe Calderón to the Institutional Revolutionary Party (PRI) of Enrique Peña Nieto to the leftist populist Andrés Manuel López Obrador (AMLO), speaks to the ineluctable truth of the two countries’ interdependence and “shared responsibility” for North American security.

Thirteen years ago, the US and Mexico signed the Mérida Initiative, which deepened and institutionalized security cooperation, whereas hitherto deep-rooted sovereignty concerns had kept Mexico at arm’s length on US security assistance. Although each Mexican president came to office promising to reimagine Mérida, assistance has been organized around four main pillars: dismantling transnational organized crime, boosting the rule-of-law, modernizing the shared border, and strengthening the resilience of local communities.

It is easy to be pessimistic about the halting progress on these urgent reforms and the need to dismantle transnational criminal organizations and root out institutional corruption. Mexican criminal groups govern huge chunks of the country’s territory and homicide rates are breaking records despite pandemic-related lockdowns. At the end of 2020, Mexico’s epidemic of desaparecidos, or disappeared persons (many of whom are presumed dead), stands at 79,000 — likely a significant undercount, since one-third of Mexico’s states have yet to report their numbers. And General Cienfuegos is not the only high-level official recently accused of collusion with cartels. With such grim statistics, what has US-Mexico security cooperation managed to accomplish under the Mérida Initiative?

While there is of course much to bemoan, the Commission’s report highlights some of Mexico’s advances — often the painstakingly slow work of institutional change that pays dividends only decades later. For instance, Mexico now utilizes some of the standards of the American Society of Crime Laboratory Directors, including professional certification and the establishment of a national DNA database, which, once made more widespread, could decrease the country’s woefully high impunity rate. Police departments continue their efforts toward professionalization and building local trust to encourage greater reporting of crimes. Most importantly, Mexico’s slow path to greater rule-of-law through criminal justice reform shows some bright spots. Recent surveys of inmates note a decrease in coerced confessions and a clearer understanding of sentencing, the presence of attentive judges at criminal trials, and the recording of criminal proceedings, as required under Mexican law.

To be sure, there is ample room for improvement. The report suggests a new path forward — a compact-like agreement where the US and Mexico reassess cooperation to date and agree on a comprehensive needs assessment. From there, the two countries should decide which datasets represent the best indicators of progress on shared goals, and the US should urge Mexico to collect that data faithfully to undertake periodic performance reviews. The US must try to institutionalize a working relationship with Mexico’s National Guard (Guardia Nacional), which, unlike its predecessor, the Federal Police (Policía Federal), has not requested US assistance. And the US should continue helping Mexican policymakers develop and implement standards for a range of institutions — guidelines on the National Guard’s use of force; best practices in human rights protection; cleaning up correctional facilities; and ensuring competent criminal prosecutors and financial crimes analysts, to name just a few. The attraction of the accreditation process remains a powerful tool to increase the quality of Mexico’s reforms.

The incoming Biden administration would be wise to heed many of these recommendations — and fast — based on lessons learned since 2007. The Mexican Ministry of Foreign Affairs recently threatened to terminate bilateral security cooperation, since its current iteration does not represent “the needs of Mexico.” Under AMLO, a concerning level of cognitive dissonance on security cooperation is creeping into Mexico’s political institutions. If the US cannot find a way to inject some fresh, innovative ideas into the relationship based on an honest assessment of Mérida’s successes and failures, it risks abandonment in this critical partnership and, consequently, its fragile gains.