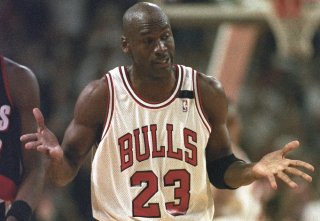 Throughout his run with the Chicago Bulls in the 1980s and 1990s, Michael Jordan frequently did battle on the court with the New York Knicks. The Bulls and Knicks played each other in the playoffs multiple times over the course of Jordan’s career, with the Bulls always coming out on top, although the Knicks did get past the Bulls in the Eastern Conference Finals in 1994, the year Jordan was retired and playing baseball. But after Jordan came back in 1995, he dropped 55 points against the Knicks at Madison Square Garden in one of his first games back.

But it was recently detailed that at one point, the Knicks tried to lure Jordan to New York.

According to an ESPN oral history article late last month, the near-move happened in 1996, after Jordan had returned to the NBA following his 18-month first retirement. Jordan was an unrestricted free agent, at a time when such free agency was relatively new to the NBA; that was the same summer that Shaquille O’Neal left the Orlando Magic to sign with the Los Angeles Lakers.

That summer, the Knicks cleared a huge amount of salary cap space, with the intention of making a run at Jordan, or possibly other free agents that summer-like Allan Houston and Reggie Miller.

Why didn’t Jordan jump to New York? The main reason was that the Bulls held his “Bird rights.” That is a provision in the NBA’s Collective Bargaining Agreement that allows teams to exceed the salary cap in order to sign their own free agents. Therefore, the Bulls could pay Jordan much more money than any other team could. There was also no rule at the time, as there is today, that limits the amounts of money that individual players can make. The Knicks reportedly tried to get creative and set up a deal for Jordan to be paid additional money by associated corporate entities but doing so would not have been legal.

Most of those quoted in ESPN’s oral history seemed to agree that the only way Jordan would have jumped to the Knicks is if the Bulls had fumbled their offer, which they did not do. The Knicks did make an offer to Jordan, of the entirety of their cap space, but did not get an in-person meeting. Jordan ended up signing a one-year deal with the Bulls for a then-record amount of $30.14 million- a single-year salary that would not be achieved by any other NBA player until Kobe Bryant, nearly 15 years later.

“If we could have gotten it done financially, we would have dropped everything else. Believe me. In the media, Jordan's camp let the word out that, if he did not get what he wanted from Chicago, he would look at other things,” Ernie Grunfeld, then the general manager of the Knicks, said in the ESPN article.

The Knicks, in 1996, ended up signing Allan Houston and Chris Childs and trading for Larry Johnson. In the years since, the Knicks have repeatedly failed to sign big-name free agents, from Lebron James to Kevin Durant, although this year’s Knicks team has clinched their first winning season in a decade.