Microwave Weapons: Are they the Future or a Costly Disaster? 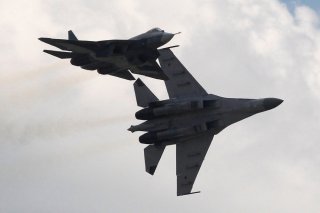 Here's What You Need to Remember: "No matter how well we may shield the cabin, this electronic pulse will get through. And as a human is also, to some extent, a ‘device’ operating on the basis of receiving and transmitting electromagnetic signals, such weapons can cause heavy damage to the health of the pilot."

Russia will arm its sixth-generation combat drones with microwave weapons.

These weapons, which disable an aircraft’s electronic equipment, already exist today “and can hit targets within a radius of tens of kilometers,” said Vladimir Mikheev, a director of state-owned Russian electronics firm KRET, in an interview with TASS.

However, Mikheev suggested that microwave weapons can be as dangerous to the user as to the target. While Russia is developing manned and unmanned sixth-generation aircraft, which are predicted to first take flight in 2025, only the unmanned version will be armed with a microwave weapon. “The electromagnetic pulse fired by the microwave weapon is so powerful that it is extremely difficult to protect the pilot from his own weapons,” Mikheev said. “No matter how well we may shield the cabin, this electronic pulse will get through. And as a human is also, to some extent, a ‘device’ operating on the basis of receiving and transmitting electromagnetic signals, such weapons can cause heavy damage to the health of the pilot.”

“Protection is already in place today: shielding, special goggles and a glass canopy covered with gold plating to reduce radiation. However, it is so far impossible to ensure 100 percent protection.”

Echoing the same debates in the United States over manned versus unmanned combat aircraft, Mikheev said that only the unmanned version of Russia's sixth-generation aircraft will have “full technical capabilities.” He predicted these drones will be hypersonic, with a speed of Mach 4 to 5, and will be capable of flight through near space (sixty-five thousand to 328,000 feet).

Mikheev also notes that that fifth-generation aircraft, such as the F-22, F-35 and Russia’s PAK FA, are characterized by supersonic cruising speed and stealth designs. But what will distinguish sixth-generation aircraft from their predecessors is the capability to work with drones. Mikheev offered a vision of Russian drone warfare that sounds much like its American counterpart. Like the United States, Russia is embracing manned-unmanned teaming, where piloted aircraft control packs of drones.

Also like American defense contractors, Russian companies say price shouldn’t be a barrier to capability. While drones are cheaper than manned aircraft, they will never be cheap. “They will come at a serious price, given that it will be a high-tech weapon—an aircraft combining hypersonic flight speed, low visibility, high security, artificial intelligence (in order to work in a group) and the most modern weapons, including electromagnetic. The sixth-generation arsenal will also include the latest weapon control systems, reconnaissance, electronic warfare, guidance, navigation and Identification Friend or Foe.”

The U.S. military is also grappling with what a sixth-generation combat aircraft will look like. Long range, stealth and supersonic cruising capabilities are likely to be features, as will be non-kinetic armament such as microwave or other electromagnetic weapons. It is a certainty that the next generation of manned aircraft will only be a component of a larger team, with the pilot the would-be master of a swarm of drones increasingly capable of autonomous flight.

The ultimate question: Will a sixth-generation aircraft even have a pilot?