MiG Alley: Inside the Air Force Dogfights of the Korean War 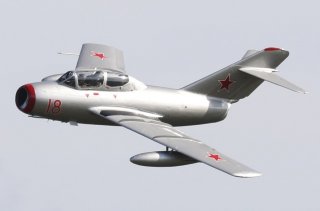 Here's What You Need To Remember: The first jet vs. jet battles in history most resembled World War I and its famed "knights of the air." Compared to the battlefields below, "Mig Alley" was an arena where duels with small numbers of fighter faced off.

What would have been the fate of UN forces deprived of air superiority doesn't bear thinking about. Fortunately, this never happened, because like a near-supersonic cavalry (maximum speed about 680 miles per hour) came a few squadrons of F-86s. Not a huge number, because American planners feared that Korea was a diversion to suck in U.S. forces defending Western Europe. But they were enough.

Russian, Chinese, and North Korean MiG pilots discovered the Sabre was razor-sharp. It couldn't fly as high, climb as fast or maneuver as agilely as its Soviet-made opponent. But it could dive faster, was more aerodynamically stable, and had a radar gunsight that came in handy during high-speed jet dogfights.

This article originally appeared in 2015.