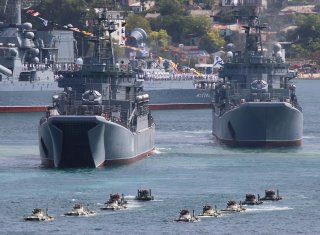 Here's What You Need to Know: The most powerful navies in 2030 will be a reflection of the broader state of the world. Some countries are invested in preserving the current international order and see naval power as a means to maintain it. Other emerging countries are building navies commensurate with their newfound sense of status, often with an eye towards challenging that order.

The United States, the dominant naval power worldwide in 1945, will continue to dominate the seas eighty-five years later. By 2030 the Navy will be halfway through its thirty-year shipbuilding plan and have built three Ford–class aircraft carriers to begin replacing existing Nimitz-class carriers. Amphibious ship numbers should be slightly higher than current numbers, and the first ship in class to replace the Ohio ballistic missile submarines should enter service in 2031.

Under current plans, the U.S. Navy should reach its three-hundred-ship goal between 2019 and 2034, but after that period the number of surface combatants begins to drop. These plans also assume a higher than average shipbuilding budget, while at the same time the service must compete with the budget demands of other services—particularly the Air Force—and domestic programs. While U.S. naval superiority isn’t ending anytime soon, the period after 2030 will be a critical one.

The Royal Navy is responsible for the UK’s nuclear deterrent and currently operates four Vanguard-class nuclear-powered ballistic-missile submarines, each equipped with sixteen launch tubes for Trident D-5 missiles. The Vanguard-class is expected to be replaced with the Successor class starting in 2028.

By one prediction, by 2030 the PLAN will have ninety-nine submarines, four aircraft carriers, 102 destroyers and frigates, twenty-six corvettes, seventy-three amphibious ships and 111 missile craft, a whopping 415 ships in total, to approximately 309 in the U.S. Navy of 2030. This would put China in a solid position as the world’s largest navy by the number of ships—though not by total ship tonnage.

Could China really reach 415 ships? Such a total would probably require twice as many submarines to be produced annually, a boost in destroyer production to achieve a net gain as older designs age out, and a huge increase in amphibious ships. It would also require two more carriers than are currently in service or under construction. Reaching such a goal would require a substantial increase in the PLAN’s budget—at a time when the Chinese Communist Party is finally applying the brakes to defense budget increases.

The combination of a downturn oil prices and Western sanctions from its annexation of Crimea will put a crimp in Russia’s economic stride for the near future. After economic growth of up to six percent annually, the bear is in recession with no immediate end in sight. A plan to replace 90 percent of Russian military equipment, including ships and naval equipment, has stalled.

This article originally appeared in June of 2016.