The Military Sealift is Essential to the U.S. Competing with China 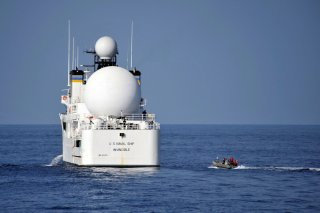 Here's What You Need to Know: In the event of a major crisis, the United States must ensure it can move its soldiers, weapons, material, and supplies around the globe.

In an era of great power competition, the U.S. military has had to relearn a number of strategic facts. Perhaps the most important of these is the central role that sealift has played in America’s ability to project power abroad. During the Cold War, the U.S. was able to not only deploy large forces overseas but move and sustain entire armies around the world. Today, 90 percent of U.S. forces are based in the continental United States (CONUS). They will have to get to the fight. Over the past three decades, the U.S. sealift fleet has been allowed to decline precipitously. As military leaders have reluctantly admitted, a future high-end conflict might be lost due to a lack of sealift. Fixing this problem has become a strategic imperative for the Department of Defense.

The primary security challenge facing the United States and its allies and partners is posed by great power competitors in Europe and the Indo-Pacific. If the United States is to remain a global power and deter threats abroad, it must have the ability to reliably move equipment and supplies by sea from U.S. ports to distant parts of the world.

The overwhelming majority of U.S. military equipment and supplies are moved by ship. This material is transported by a combination of the government-owned organic sealift fleet and commercial vessels on contract. While the U.S. Army is most dependent on sealift to move its equipment and supplies overseas, all the Services operating abroad rely on sealift for support and resupply, including underway replenishment for Navy ships. Even in its recent limited conflicts, the U.S. military was sustained primarily by a steady flow of material transported halfway around the world on organic and commercial vessels.

Even as the U.S. military spends tens of billions of dollars modernizing its airplanes, combat vehicles and ships, it risks being unable to get its new capabilities to the fight or sustain them once deployed due to a lack of sealift. Over recent decades, the fleet of government-owned cargo vessels has declined in number and those that remain are badly in need of modernization. Today, the ability of the U.S. military to reach a large-scale fight and sustain itself once deployed is dependent on a little over 100 ships: 46 Ready Reserve Force (RRF), 15 ships for surge operated by the Military sealift Command, and some 60 U.S.-flagged commercial ships that are part of the Maritime Security Program, meaning they are available to the military in a crisis.

But these fleets are aging and in need of modernization. According to a recent report by the U.S. Army to the House Armed Services Committee: “Without proactive recapitalization of the Organic Surge Sealift Fleet, the Army will face unacceptable risk in force projection capability beginning in 2024 . . . By 2034, 70% of the organic fleet will be over 60 years old — well past its economic useful life further degrading the Army’s ability to deploy forces.”

In the event of a major conflict, the Pentagon will need to surge the RRF to provide additional, timely capacity to move forces and supplies. The industry has been concerned with the aging state of the RRF and its evident inability to support rapid and responsive surge sealift deployment. As Mark Buzby, former Maritime Administration (MARAD) Administrator observed in testimony before the House Armed Services Committee, “The U.S. Government-owned Ready Reserve Force (RRF) and Military Sealift Command (MSC) surge sealift fleets are aging and in need of recapitalization. The U.S. shipbuilding industry has largely lost the capacity to build, repair, and replace the large, commercial-type ships needed for sealift at a pace adequate to meet U.S. wartime needs.”

The existing RRF fleet needs to be upgraded with more modern ships that can be readily surged.

There are only a limited number of options for correcting this problem. Buying new ships built in U.S. shipyards is prohibitively expensive. Building new ships in foreign yards is politically and strategically unattractive. Given the need to revitalize the RRF and the budgetary realities that work against building new sealift ships, the only viable option, one supported by DOD and members of Congress, is to purchase commercial vessels which would then be converted to become militarily useful for the Ready Reserve Force.

As DoD moves ahead with acquiring used commercial vessels for the RRF, attention needs to be given to how they should best be configured. To provide the greatest utility and flexibility, the U.S. Navy and MARAD, which manages the RRF, should consider designing these converted commercial ships as multi-mission supply vessels rather than for single-purpose use.

A multi-mission design would enhance the ability of the U.S. surge fleet to support large-scale or complex military operations. Such a design combines the best features of container, roll on/roll off, and heavy lift into one unit which offers versatility for operations in a contested environment. Vessels designed this way would have expanded capabilities by including accommodations for up to 100 personnel, medical facilities, and potable water production for up to 120,000 gallons per day. Multi-mission ships would be designed with ammunition-carrying capability, ensuring timely delivery of essential support material when needed. By employing a common design, RRF ships could be rapidly activated. This could be of critical importance in the event of a fast-moving crisis.

This approach has several additional benefits. First, multi-mission vessels provide greater flexibility and enhanced warfighting readiness in comparison to maintaining a fleet of single mission vessels. Second, retrofitting existing commercial vessels into multi-mission ships would be a cost-effective way of modernizing the RRF fleet. Third, by using a single design, U.S. shipyards would be able to execute the program in a timely manner. Fourth, the program could be designed as a turn-key retrofit. It could be performed in U.S. shipyards with over 90% of the labor being done “above the waterline,” therefore reducing the need of valuable dry dock resources. Fifth, a multi-mission refit of used commercial cargo vessels would provide an economical option for MARAD to acquire a multi-mission vessel that is fully retrofitted with modern technology and is customized to the needs of the RRF.