The Military's New Weapon Against China and Russia: the Coast Guard? 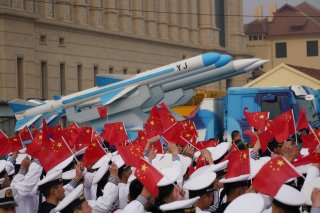 To combat increasing threats from China and Russia, the Coast Guard will operate far from America's coasts and will have a presence from the Middle East to the Arctic. It will send more ships on long deployments to help take some of the workloads off of the United States Navy.

Schultz recently signed into the 2020 Tri-Service Maritime Strategy with Chief of Naval Operations Adm. Mike Gilday and Commandant of the Marine Corps Gen. David Berger. According to USNI News, that strategy would focus the Navy's priority on control of the seas; the Marine Corps would take on an increased expeditionary combat power; while the Coast Guard would expand its global outreach.

"We bring a range of maritime capabilities to bear across what I like to refer to as the cooperation-competition-lethality continuum," Schultz said during his address.

This will include greater inoperability between the three services, and take on a joint approach to maritime operations Schultz added. Just as the Marine Corps is undergoing a transformation that included retiring its tank force, the Coast Guard's role will evolve as well.

"You're looking at a different Marine Corps model here in the decade ahead a little bit, with more focus on the Pacific and… more disaggregated forces," Schultz said. "I think there's maybe some new, complementary places where the Marine Corps and the Coast Guard can work in that part of the world."

As noted, the Coast Guard won't remain near America's actual costs, and this will include a larger presence in other regions.

Later this month, the Coast Guard's Legend-class cutter, also known as the National Security Cutter (NSC), USCGC Hamilton (WMSL-753) will be deployed to the Mediterranean, where it will join two Sentinel-class cutters (Fast Response Cutters), and replace six patrol boats supporting the Navy's operations in the region.

In the Pacific, the Coast Guard has added more resources to Guam and is working closely with the U.S. Indo-Pacific Command (INDOPACOM). This is to respond to potential threats from China, especially as Beijing passed a new law that went into effect on Feb. 1. It gave the Chinese coast guard, which is the largest in the world, far broader authority, including the use of force in disputed regions.

China's coast guard, which operates actual warships that are larger than the U.S. Navy's Aegis cruisers, and more worrisome is that the Chinese service has been described as the "actioning arm" for the Chinese Communist Party (CCP) government. While the actual People's Liberation Army Navy (PLAN) has largely avoided being too aggressive in its actions, the coast guard and the People's Maritime Militia have done their fair share of saber-rattling including in distant waters off Ecuador.

The U.S. Coast Guard will help to counter some of these threats from Beijing, while the service will also send a new attaché to Copenhagen to work with Denmark and Norway on issues related to the Arctic. That follows the first-ever Coast Guard attaché to Australia last November, while another is set to be deployed to Singapore for the first time next year.

"I see these strategically placed Coast Guardsmen making a big impact with our global maritime partners" Schultz said as reported by BreakingDefense. "This is part of our effort to increase our footprint in the Indo-Pacific, doubling-down on operations and engagements with like-minded island nations and Quadrilateral Security Dialogue partners."