Mini Rifles? One Company Actually Made One 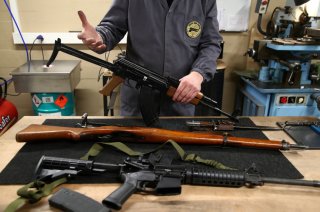 Here's What You Need to Remember: "The M-16K is ideal for bodyguard/escort duty in the confined space of an automobile or helicopter. For military use, it is an excellent alternative to the submachine gun for armored vehicle crewmen. It is also an effective ‘entry weapon’ for police SWAT teams."

Tim La France’s company La France Specialties developed the M-16K in the early 1980s. This carbine had a 21-centimeter-long barrel and an overall length of 60 centimeters with its stock collapsed.

La France meant the extremely compact M16K “for situations where a full-power rifle is desirable, but a smaller size weapon is necessary.”

“The M-16K is ideal for bodyguard/escort duty in the confined space of an automobile or helicopter,” a 1991 La France brochure claimed. “For military use, it is an excellent alternative to the submachine gun for armored vehicle crewmen. It is also an effective ‘entry weapon’ for police SWAT teams.”

But in fact, I haven’t been able to find a single major buyer of the short M-16.

The carbine was chambered in 5.56-by-45-millimeter. La France also produced a .45-ACP version — the M16K-45. It fed from Thompson submachine gun magazines. The “K” in the designation was apparently a reference to Kurz, the German word for “short.”

The carbine is 16.5-centimeters shorter than the standard issue M-4 is.

In order for the M16K to function reliably with its shorter barrel and gas system, La France added an adjustable gas system with an expansion chamber and second enclosed tube.

This ensures the carbine’s cyclical rate remains below 600 rounds per minute. The M-16K-45 instead features a blowback action. Examples of the carbine have been built on upper receivers both with and without forward assists.

Externally the carbine is characterized by its short size and unusual profile utilizing a cut-down M-16A1-style triangular hand guard with a proprietary end-cap and integrated sling loop.

As a result, the carbine lacked the M-16’s standard foresight post. Instead, it had an additional front sight aperture on the carrying handle. While this gave it a very short sight radius, this was adequate for the carbine’s short range.

Later models of the M-16K feature the standard M-16-style sight post and sight and also have rounded hand guards and accessory rails.

For a time La France himself worked as an armorer for the film industry. The M-16K appeared in a number of films and T.V. shows, including Death Wish 4, Escape from L.A. and Naked Gun 33 1/3.