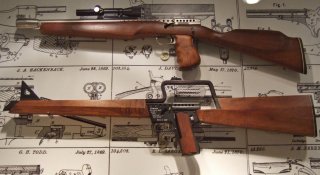 Here's What You Need to Remember: A lack of ammunition has made this collector's item difficult to shoot today.

In the 1960s an American engineer and his partner invented a gun that fired rocket-propelled ammunition.

Yes, rocket-propelled. Like a space launch, only much smaller and way deadlier.

The Gyrojet handheld rocket gun was a unique child of both the Cold War and the Space Race. Meant for combat in Vietnam, it enjoyed a brief cameo in a James Bond flick and was the object of some half-hearted espionage — but soon fizzled out.

The Gyrojet was the brainchild of Robert Mainhardt, an engineer who had worked at Los Alamos Scientific Laboratory and the U.S. Atomic Energy Commission, and his business partner Arthur Biehl. Much larger rocket weapons such as the bazooka and the Soviet RPG-7, designed to destroy tanks, were already in widespread use. Mainhardt and Biehl wanted to scale down the concept for taking out individual human beings.

It’s important to think of the Gyrojet not as a gun that shot rockets but rather a rocket launcher that looked like a gun. The weapon, which came in both pistol and rifle configurations, was basically a tube with pistol or rifle-like ergonomics and a simple firing mechanism. Like its larger cousin the RPG, it had few moving parts — certainly fewer than a conventional pistol or rifle.

A conventional gun fires a bullet pushed by a single explosion inside the weapon. As the bullet travels farther away from the gun, the speed of the projectile slows. The Gyrojet rocket, on the other hand, actually got faster the farther it flew from the gun.

There were problems. For one thing, the rocket traveled at a very slow speed at first — at a distance of 60 feet, it was going a pathetic 100 feet per second. By comparison, a nine-millimeter bullet at the same distance will travel around 1,200 feet per second. The Gyrojet pistol was useless at the ranges to which pistols are best suited — and also lacked the sights and optics to engage targets at a distance.

The rockets, which were steel-tipped for piercing armor, were stabilized in flight by ported exhaust tubes designed to induce spin. Spinning gave the rocket stability in flight, but not much stability, because accuracy was still an issue. At a distance of 100 yards it was supposedly 50 percent more powerful than a .45-caliber bullet. The hard part was hitting anything at 100 yards.

Literature published by MBA Associates upon the Gyrojet’s debut claimed that the new weapon “never needs oiling or cleaning,” could be fired underwater or in outer space and that the rockets could be “buried under dirt or mud and used as booby traps that can be set off automatically by time devices or trip wires.” Since they launched rockets at initial low muzzle velocity, the guns had no recoil.

The rocket gun attracted lots of attention — not all of it welcome. In 1966, shortly after the Gyrojet was made available to the public, a California gun shop owner was visited by Soviet military attaches who attempted to buy one of the pistols. The store owner wouldn’t sell them the weapon, but he did sell them ammunition.

More favorably, the rocket gun played a cameo role in the James Bond film You Only Live Twice. Introduced as a Japanese invention, Gyrojets were used by Japanese spymaster Tiger Tanaka and his army of ninjas to stop a SPECTRE plot to ignite World War III.

I once had the opportunity to handle a Gyrojet. One day a new shipment of long guns arrived at the auction house where I worked. I noticed one weapon that was shorter than the rest. It didn’t look like a hunting rifle, a musket or a bolt-action military rifle.

As an arms and armor auction house, we were always getting weird stuff — and none weirder than this. It looked like a pistol with a shoulder stock, a lengthened barrel and a flared muzzle resembling a hi-tech blunderbuss. It was strikingly lightweight — possibly as little as three pounds.

With a stock made of a blonde wood and what appeared to be an aluminum barrel, the gun was an odd blend of the organic and futuristic. It would not have looked out of place resting next to a sofa in a Scandinavian furniture catalog.

It slowly dawned on me what I was holding. “This,” I said to my befuddled coworker, “is a rifle that shoots rockets.” I held it carefully, thinking it was probably quite rare, but it was so lightweight and had such great pointability that I was soon swinging it around like a toy. It didn’t really have a balance point, although I’m sure stuffed with rockets it was balanced just behind the trigger.

A handful of Gyrojet weapons saw combat in Southeast Asia with the U.S. military’s secretive Studies and Observation Group, a cover name for a group of highly trained commandos that carried out top-secret missions behind enemy lines. As John Plaster wrote in his book SOG: The Secret Wars of America’s Commandos in Vietnam, SOG acquired a small number of the pistol version to try out in the field. SOG commandos were known to carry everything from Swedish K submachine guns to crossbows, so this was not surprising.

“In one test, a rocket round punched through an old truck door and into a water-filled 55-gallon drum, almost exiting its opposite side,” Plaster wrote. SOG men also test-fired it through sandbag walls and even tree trunks.

Vietnam uncovered problems with the Gyrojet weapons. The rocket engines disliked the humidity of Southeast Asia and sometimes burned unevenly. The need to achieve velocity at the expense of short-range lethality plus poor rocket reliability and other performance issues doomed the Gyrojet. A full-scale military contract was not to be, and ultimately only a thousand or so were built.

Today the Gyrojet weapons are collector’s items. Due to a lack of ammunition, it is almost unheard of to actually shoot one. There is at least one effort out there to restart research into Gyrojet technology. Maybe 50 years later, the time is right to try again to replace bullets with rockets. Or maybe this is still a sort of good idea whose time will never come.