Misnomer: The British 'Valiant' Tank Was Anything But 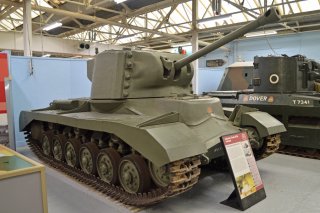 Here's What You Need to Remember: The Valiant was a failure. Though the design did leave the drawing board, only a single prototype was built, and the tank never saw combat—probably a good decision, considering the Valiant’s many shortcomings.

During the Second World War, the British Army wanted a tank with very heavy armor, but that kept weight to a minimum. They wanted, in essence, a rolling contradiction.

Despite the Valiant’s overall failure, it did feature some useful innovations. Perhaps first and foremost was the Valiant’s front armored glacis. In contrast to most tanks of the era, the Valiant’s hull featured a distinct outward-facing point. In addition to better deflecting enemy shells, the sloped surface also increased the amount of armor plating an incoming round would have to penetrate.

The turret was also heavily armored, though at a cost. In addition to a fairly tall profile, the turret surfaces were nearly vertical, presenting a weaker, thinner target to enemy tanks and anti-tank crews than a sloped turret surface would have. Likewise, the frontmost hatch, the bulge in between the hull front and turret ring, also presented a near-vertical surface and was therefore also a weak point.

Taken as a whole, the Valiant’s armor package was formidable. The tank’s frontal armor was a whopping 114mm thick, or nearly 4.5 inches, making the Valiant one of the most heavily armored tanks of the era. The drawback to all of that steel was ground clearance. The Valiant rode a mere nine inches off the ground and so off-road ability was severely hindered.

Although the Valiant was armed with the powerful Ordnance QF 6-pounder gun, a 57mm gun also used by the United States, it would have been inadequate against much German armor by the time it could be fielded and see combat.

Armor and main gun shortcomings aside, perhaps the weakest point of the Valiant design was its extremely under-powered engine. With a paltry 210 horsepower, the Valiant was only capable of low speeds. By comparison, the M4 Sherman tank, the powerhouse of Allied armor during the Second World War had between 375 and 450 horsepower, depending on the engine variant.

Even on paved roads, the Valiant could not break fifteen miles per hour. Off-road maximum speed was even less. At the time, this was not necessarily seen as a problem as the Valiant was meant to travel in tandem with dismounted infantry.

The last, but not least important of the myriad problems the Valiant faced was its steering controls. So insensitive were the tank’s steering levers that test drivers were driven to exhaustion trying to steer and risked injury to themselves.

The Valiant was a failure. Though the design did leave the drawing board, only a single prototype was built, and the tank never saw combat—probably a good decision, considering the Valiant’s many shortcomings.