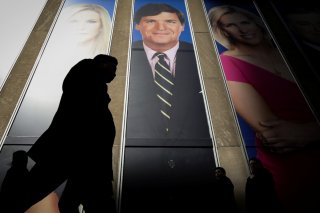 Vice-presidential candidate Kamala Harris pronounces her name “comma-la,” but many of her fellow Americans — including Fox News host Tucker Carlson — mispronounce it as “kuh-MAH-luh” or “kuh-MALL-uh.”

When called out about this on his TV show, Carlson snubbed defensively: “So I’m disrespecting her by mispronouncing her name unintentionally? … kuh-MAH-luh Harris or KAM-uh-luh Harris or whatever.”

In this instance, Carlson personifies “Whatever People,” one of several types of name bunglers that are called out in an MTV video.

“If you do this, you are a bad person,” says Maritza Montañez, who describes the daily distortions of her own name as “just exhausting.” Mamoudou N'Diaye, another performer in the video, explains: “People mispronounce my name seven days a week.… If you don’t say my name correctly, it’s basically like saying, I don’t care about you as a person.”

In his 2010 book Microaggressions in Everyday Life, psychologist Derald Wing Sue argues that superficially trivial incidents like “the boss forgetting or mispronouncing your name” accumulate, and as such, they are “equally disruptive and harmful” as “large, overt racial or gender gaffes and overt obvious acts of discrimination.”

Such microaggressions are said to take a particular toll on members of minority groups. In Rita Kohli and Daniel Solórzano’s study of minority students across the United States, “many participants shared that the issues they experienced with their names in school caused them a great deal of anxiety, shame or feelings of ‘othering’.” For example, they report an incident in which a vice-principal bungled a Chinese American’s name before laughing at his own mistake.

He butchered her name mercilessly, shaking his head and laughing as others laughed along… It is likely he did not intend malice.… But because this student had endured years of subtle racial slights, her cumulative experience with the fumbling of her name led her to feel humiliated by his action and see her culture as inferior.

The authors conclude that name blunders are “insults/assaults,” and that, “to prevent internalized racism, teachers must own this issue regardless of the cause of a mispronunciation.”

Sigmund Freud infamously argued that mistakes are deliberate, in that each facilitates “an unconscious intention.” He and his colleagues attached special significance to proper names being misspoken, misremembered, misheard, misread or misspelled. All such mishaps were psychoanalyzed as performed below the level of awareness, as subtle slights — personal names being personal, after all.

the general inability to bear other people’s names in mind is an expression of an excessively high estimation of the importance of one’s own name and of oneself in general, with a corresponding indifference to, or depreciation of, other people.

“No alteration is too slight to have a meaning,” Jones insisted, citing the case of a foreign visitor who mistakenly referred to psychologist Edward Titchener as “Kitchener.” According to Jones, this slip originated in the visitor’s contempt for Titchener and his expertise:

A few minutes before, while talking about experimental psychologists in general, he had allowed himself to make the scurrilous remark that in his opinion they should be called the pantry-cooks of psychology, on account of their menial field of work; the passage from ‘cook’ to ‘kitchen’ is obvious.

Titchener, whom Freud considered a leading adversary, advocated instead for a more scientific approach to introspection and mental processes, using experimental procedures, measurements, and observations in a controlled laboratory. Titchener also warned against the “stimulus error” — failing to tease apart objective experiences from how we think, know or judge them to be.

Titchener’s century-old concerns are echoed in psychologist Scott Lilienfeld’s arguments that microaggression research falls short of scientific rigor. Racial microaggressions are subtle acts of racism and aggression, which certainly occur, but Lilienfeld shows that their valid application to individual situations is fraught.

For example, Carlson’s “whatever” was decidedly dismissive and arguably aggressive (if defensive), but it was anything but subtle. Was it also racist? Critical race theorists like Solórzano et al. would probably say so. As Robin DiAngelo puts it: “The question is not ‘did racism take place?’ but rather ‘how did racism manifest in that situation?’”

As a clinical psychologist, Lilienfeld describes this way of thinking as dangerous. He says that ill intent exists to be sure, but the mental health of a racialized person is not well served by assuming the worst from most if not all awkward statements or flubs they encounter in life. Lilienfeld also worries that a racialized person who feels depressed or oppressed, perhaps due to actual racial microaggressions, is likely to perceive more racial microaggressions and thereby get trapped in a vicious cycle of negative emotions.

This is not to say that microaggressions only exist in perceivers’ minds. For instance, Carlson’s mispronunciation of Kamala is a textbook example of a linguistic process called “hyperforeignization.” Roughly, speakers go out of their way to refit foreign-looking words with pseudo-foreign speech sounds and sound patterns. This process is so strong that the Japanese had to rebrand Matsuda (“MAT-soo-da”) and Dattosun (“DAT-toh-soon”) as Mazda and Datsun, respectively, in order to avoid the American hyperforeignisms “maht-SOO-duh” and “dah-TOH-suhn.”

Hyperforeignisms are literally “othering,” and yet, as unconscious phenomena, the intention behind them cannot be reliably established as aggressive or racist without considering independent observations and factors. For example, we also know that “male and female English names show systematic differences in sound pattern: female names are far more likely to have unstressed initial syllables.” So Carlson’s “kuh-MAH-luh” could also be understood as “hyperfeminization.” At any rate, his insistence on mispronouncing Kamala and his dismissive “whatever” confirmed the disrespect he was accused of.

This is precisely what makes racial microaggressions unsettling — they’re indeterminate by definition. As social psychologist Dorraine Green describes it: “There’s uncertainty about whether or not your experience was due to your race, for example, or due to something unrelated, such as the other person being in a bad mood or having a bad day.… That uncertainty is distressing.”

This is precisely what makes racial microaggressions unsettling — they’re indeterminate by definition. As social psychologist Dorraine Green describes it: “There’s uncertainty about whether or not your experience was due to your race, for example, or due to something unrelated, such as the other person being in a bad mood or having a bad day.… That uncertainty is distressing.”