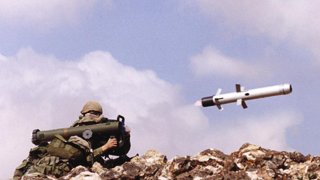 Here's What You Need To Remember: The Spike missile is not always the best tool for the job.

Although Israel’s Spike missile has achieved great success in both its domestic and export markets, some media outlets question how effective the missile really is. There are a variety of claims made in this article, so it’s worth dissecting into individual points.

The first criticism of the Spike missile is of the LR variant. The article claims that during German tests, the LR missile suffers target confusion if there were multiple heat generating targets in the same region. It asserts that the seeker loses sight to the target at a certain point during its pop up attack, and then when it reacquires a target, it might not be the same target as originally locked.

The assertion that the seeker loses sight to the target during a normal top-attack flight profile is questionable. In a video taken from the Spanish Army training with the Spike-LR, one can see that the seeker maintains constant sight of the target from launch to impact.

While the video could be shot at close range, the principle of conservation of energy would dictate that the popup height (and thus possible seeker offset angle) would only be lower for longer range shots. The symbology in the footage further supports this. “Alta” meaning “high” in Spanish is displayed in the bottom right, which indicates that the Spike is in top attack mode and would follow a high attack profile with a large seeker offset angle.

It’s possible that a disruption like that could occur if a shot was taken through obscuring smoke or with very low cloud cover, but such conditions were not mentioned in the article. As the Spike-LR’s seeker can operate in either CCD (standard black and white electro-optical tracking) or IIR (thermal tracking) modes, targets could presumably be even tracked in such conditions if the smoke was not designed to mask thermal IR wavelengths.

Firing exercises undertaken by the Polish Army lend some credence to the theory that low cloud cover could cause the seeker to lose lock. The Polish article mentions that due to bad weather conditions the operators had to correct the flight of the missile manually. But despite such difficulties, the guidance remained true, and the missiles were able to hit the targets.

Therefore, the assertion in the article that the missile “acquires a wrong launch trajectory which cannot be corrected during the flight” seems suspect. Even when some Polish operators experienced “unusual behavior of the projectile” in a test firing, they were able to overcome and hit the target.

Another thing that can be seen in the 2010 Polish footage is the seeker (as in the Spanish videos) remains largely on the initial target until the operator initiates steering movements. The criticism in the article asserted that the Spike would switch targets by itself. While the Spike-controlled steer point appears to jitter around a little, it shows no signs of switching to the other target.

Other footage of the Spike-LR being shot in 2012 by Polish troops shows that the lock-on after steering also works, with the reticle being steered onto the tank target, then tracking on its own.

The article’s criticism of the Dutch use of the Spike-MR is possibly more valid but begs the question of why a fire-and-forget system was used for such a task in the first place. According to the article, the Dutch wanted to use the Spike-MR to deliver precision effects against enemy positions.

Fire-and-forget weapons are rarely ideal for such counter-insurgency tasks as in the end the guidance circuit is controlling the missile, which leads to the missile going to where the circuit thinks the missile should go. For maximum precision, semi-automatic command line of sight (SACLOS) systems ensure the impact point is close to where the operator desires it to be. Spike-LRs have this capability with fire-and-steer, but MRs are only fire and forget.

It’s definitely possible that the MR’s thermal camera would have problems picking out targets during the day in Afghanistan. French units using the American Javelin in Afghanistan reported similar problems with the Javelin CLU’s thermal camera, saying “From 9 AM on, it is very hot already, it gets almost impossible to detect anything, it is fuzzy all over and we can see nothing.”

However, it’s for that exact reason why the Spike-MR has a regular electro-optical seeker that operates on the visible spectrum. The article asserts that the MR in this sensing mode also failed to track, due to the brightness of the sky and desert in Afghanistan, but footage of the Spike-LRs being shot in the Israeli desert in electro-optical mode show good contrast between the sky, the ground, and a target.

Admittedly, the Spike-MR seekers could be worse quality, but no similar daytime targeting problems were reported in Polish or Finnish service. Finland still relies on conscripts, so usually any problems with issued equipment tend to disseminate rapidly.

In the end, the Spike-MR issues discussed can largely be categorized as bringing the wrong tool to the job. French infantry preferred using the SACLOS Milan missile over the Fire and Forget Javelin in Afghanistan for the same reason.

The author would like to thank Michał Kizeweter for assistance in researching the Spike in Polish service.

Quote about the difficulty of the French Javelin CLUs in Afghanistan was taken from Versatility and Technology: A Case Study of the Milan and Javelin by Sophie Lefeez.

Thie article first appeared in 2018. It is being republished due to reader interest.