Missing in Action: Six of America's Nuclear Weapons Are Unaccounted For. 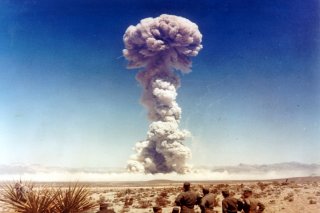 Here's What You Need to Remember: While this should be as scary as suggested, the good news is that in the past 50 plus years, no other nuclear weapons have been lost – at least that we know of.

The 1996 John Woo film Broken Arrow features a quite memorable line – uttered by character actor Frank Whaley – "I don't know what's scarier, losing nuclear weapons, or that it happens so often there's actually a term for it." In fact, the term "Broken Arrow" does refer to the loss of a nuclear weapon and it has happened more than once.

Between 1950 and 1980, there have been 32 documented nuclear weapon accidents that involve the unexpected accidental launching, firing, detonating, theft or loss of the weapon. To date, six U.S. nuclear weapons have been lost and shockingly never recovered. Below you will find a breakdown of the situations that lead to this shocking statistic.

The longest missing nuclear weapon hasn't been seen in 71 years, and it is unlikely it will be found anytime soon.

It was lost when the crew of a United States Air Force Convair B-36 bomber was conducting a mock nuclear strike and was en route from Eielson Air Force Base (AFB), Alaska to Carswell AFB, Texas, when it developed engine trouble. Not wanting to have a crash with a nuclear warhead, the crew was ordered to drop its 30-kiloton Mark 4 (Fat Man) bomb into the Pacific Ocean.

According to the "official" report, the bomb didn't contain the plutonium core necessary for a nuclear detonation, but it still contained a substantial amount of uranium.

Six years after losing the first bomb, two nuclear cores were lost when a B-47 bomber likely crashed in the Mediterranean Sea while en route from MacDill AFB, Florida to Ben Guerir Air Base, Morocco. The aircraft had successfully completed its first aerial refueling, but it failed to make contact with a tanker for a second refueling and was reported missing.

The exact weapon wasn't disclosed, but the B-47 typically carried the 3,400-kilogram Mark 15 nuclear bomb. No trace of the plane nor the cores has ever been found.

During a simulated combat mission near Savannah, Georgia, another Air Force B-47 bomber carrying a Mk 15 weapon collided with an F-86. After multiple attempts to land, the bomber crew was given the green light to jettison the bomb to reduce weight, and also to ensure it wouldn't explode during an emergency landing. The bomb, which was dropped over the Wassaw Sound near the mouth of the Savannah River, wasn't recovered.

Somewhere near Goldsboro, North Carolina, a uranium core is likely buried in a field. It had been one of the cores for a pair of 24-megaton nuclear bombs that were on a B-52 that crashed shortly after takeoff. What is especially unsettling about this incident is that three of the four arming mechanisms on the bomb that was recovered had been activated.

The second bomb's tail was discovered 20 feet below ground in the muddy field, and when efforts to find the core failed to uncover it, the military did the next best thing. The United States Army Corps of Engineers purchased a 400-foot circular easement over the buried components to restrict digging.

Somehow an A-4E Skyhawk attack aircraft, loaded with a one-megaton thermonuclear weapon, managed to roll off the deck of the USS Ticonderoga and fell into the Pacific Ocean. The pilot, plane and bomb quickly sank in 16,000 feet of water and were never seen again.

However, it wasn't until 15 years later that the U.S. Navy even admitted the accident had taken place, and only noted it happened 500 miles from land. However, that wasn't true – as the carrier was about 80 miles from Japan's Ryuki island chain. As a result of that accident, the Japanese government now prohibits the United States from bringing nuclear weapons into its territory.

The final bomb to be lost and not recovered occurred sometime in the first half of 1968, and involved the loss of the U.S. Navy's nuclear attack submarine USS Scorpion, which sank about 400 miles to the southwest of the Azores Islands. In addition to the tragic loss of the 99 crewmembers, the submarine was carrying a pair of nuclear-tipped weapons, which had yields of up to 250 kilotons.

While this should be as scary as suggested, the good news is that in the past 50 plus years, no other nuclear weapons have been lost – at least that we know of.

Image: "US nuclear weapons test in Nevada in 1951" by International Campaign to Abolish Nuclear Weapons is licensed under CC BY-NC 2.0