Mnuchin Should Know: A Coronavirus Tax Holiday Could Destroy Medicare 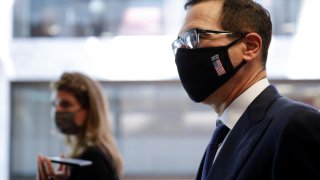 In an interview on Fox News Sunday, Chris Wallace asked Treasury Secretary Mnuchin whether the decision to halt payroll tax collections would “gut” Social Security and Medicare. Mr. Mnuchin responded that there would be “no reduction in benefits” because there would be an “automatic contribution from the general fund” to the trust funds. That response misstated both the policy signed by the president and the potential to undermine financing for those essential programs.

This follows the Coronavirus Aid, Relief, and Economic Security Act (CARES Act), which allows employers to defer paying their share of Social Security taxes through the end of 2020. The CARES Act does not defer the employee’s share of Social Security payroll taxes or Medicare payroll taxes. Using executive authority, the president’s order amends the CARES Act to give employees the same temporary relief given to employers.

The new policy would increase the amount paid to workers net of taxes and other deductions. A worker earning $4,000 every two weeks — the upper limit on those who are eligible for the deferral — would receive an additional $568 a month (before income taxes and other deductions), based on a tax rate of 7.1 percent for the employee’s share. Average earnings are about half that amount, so the typical full-time worker is likely to be paid about $280 a month more under this policy.

Many workers would have trouble repaying four months of deferred payroll taxes. In his August 8 press conference, the president said he intends to forgive those taxes and make permanent cuts to the payroll tax if he is elected to a second term. Such proposals are likely to be popular regardless of who wins in November.

The optics of trust fund accounting explain why the CARES Act and the president’s action did not include Medicare. The Social Security trust fund has a projected depletion date of 2035. Medicare’s Hospital Insurance (HI) trust fund is projected to be depleted in 2026. Deferring tax collections this year would have no significant impact on the fiscal health of either program, but policy makers on both sides of the aisle are leery of being accused of threatening seniors’ benefits. Medicare’s depletion date was too close for comfort.

Although there is no holiday for Medicare’s payroll tax, the president’s action opens the door to deferring or reducing that tax for middle-class and lower-income workers. The argument is deceptively simple: Medicare and Social Security provide support for the same populations, so why should they be treated differently?

As a short-term measure to ease the stress of an economy in deep recession, that may be plausible — although the amount of additional funds available to workers would be modest, at less than $60 a month for an average worker (based on the 1.45 percent tax rate for the employee’s share).

A permanent reduction or elimination of the Medicare payroll tax for lower-income workers would have serious consequences for the program. The resulting loss of revenue could move the insolvency date up a year or two, precipitating pressure to create a new automatic subsidy for the HI trust fund out of general revenue — a subsidy that does not currently exist. That would remove one more barrier to open-ended spending in Medicare. Perhaps Secretary Mnuchin’s comment to Chris Wallace was less a slip of the tongue than a prediction of where policy is likely to go next year.

Learn more: COVID-19 and the Medicare trust funds | Will COVID-19 bankrupt Medicare? | Covering the uninsured during the COVID-19 pandemic

This article by Joseph Antos first appeared in AEIdeas on August 11, 2020.