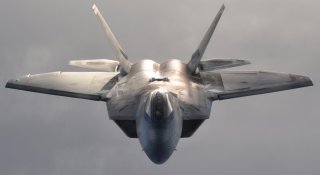 Here’s What You Need to Remember: Gruene said the Raptor excels at fighting from beyond visual range with its high speed and altitude, high-tech radar and long-range missiles. But in a slower, close tangle — what pilots call a “merge” — the heavier F-22 is at a disadvantage. “As soon as you get to the merge … the Typhoon doesn’t necessarily have to fear the F-22,” Gruene said.