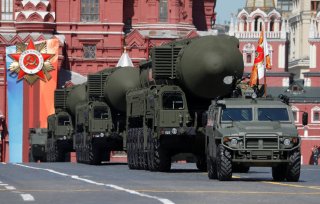 Here's What You Need To Remember: Putin’s statements on the strategic nuclear weapons’ command and control also came as the Kremlin has announced that it hopes it will be possible to build a new dialogue with the next U.S. president and potentially improve relations between the two countries.

“Over the past few years, much has been done to maintain all of the strategic nuclear forces’ command and control components at the highest level,” the Russian head of state said at a defense industry meeting on Wednesday, according to Tass.

“[Russia] has considerably modernized stationary and mobile command and control centers, expanded their analytical and operational capabilities, including information provision, monitoring and situational analysis,” Putin added. “The quality of such a major parameter as jamming resistance has increased. Today all the command and control centers allow receiving comprehensive data on the situation in real time, assess the situation based on this information and make substantiated decisions.”

“It is perfectly clear that the stable, effective and reliable operation of these systems and the entire command and control contour in a combat environment is crucial for the combat potential of the nuclear triad and, generally, the army and the navy to adequately and quickly respond to potential military threats,” the Russian leader added.

The nuclear triad is a three-pronged military force structure that consists of land-launched nuclear missiles, nuclear-missile-armed submarines, and strategic aircraft with nuclear bombs and missiles. Russia inherited the nuclear arsenal of all the former Soviet states.

Putin has said that he believes that the nuclear triad remains a key guarantee of military security, which makes attempts at putting pressure on Russia essentially futile.

“Although the nature of military threats is changing, it is the nuclear triad that remains a key guarantee of Russia’s military security and, if one takes a broader look, of global stability,” Putin said in his opening remarks at a meeting with top Defense Ministry officials and heads of federal agencies and enterprises of the defense-industrial complex on Tuesday.

“Preservation of this balance of force reduces to nothing the risk of a large-scale military conflict and in fact makes any attempts at blackmail or pressure against our country senseless,” Putin added.

The United States and Russia have been close to an agreement to temporarily freeze the number of warheads on both sides and extend the New Strategic Arms Reduction Treaty (New START) for one year. However, the Trump administration has previously made it clear that any nuclear freeze must include China.

Russia has maintained that it will not get into an “exhausting arms race” and said there is no reason for it to do so.

“For the first time in history Russia is not in the position of a runner-up,” added Putin. “It has come up with certain weapon systems that are years and even decades ahead of foreign counterparts. Some systems are unparalleled in the world and most likely will remain as such for quite a long time.”

Putin’s statements on the strategic nuclear weapons’ command and control also came as the Kremlin has announced that it hopes it will be possible to build a new dialogue with the next U.S. president and potentially improve relations between the two countries.

“We hope that it will be possible to build dialogue with the next U.S. president and agree on ways to improve bilateral relations,” Russian Presidential Spokesman Dmitry Peskov told reporters on Monday. “Particularly because an important field of bilateral relations, the security and stability field, concerns not only our two nations but in fact all nations in the world.”