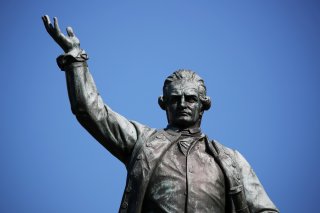 The global furore about the meaning and relevance of statues, memorials and place names from a racist, imperial past presents a special challenge to Aotearoa-New Zealand. In this former colonial outpost we are dealing with a double burden: the memorialisation of unsavoury historical figures, and the fact that they were imported from elsewhere.

There is the added irony of this current debate having arrived here from overseas, too. Are we ready to craft our own decolonial exit strategy? Or will we weakly copy what’s taking place at the former imperial centre?

Examining all this drills to the very bedrock of colonial history. It shakes the imperial foundations.

The Black Lives Matter protests in the US have provided the latest flashpoint for this issue. The echo in Aotearoa-New Zealand has so far involved a restaurant named after infamous Pacific slave trader Bully Hayes, a pub named after Captain Cook and a statue of New Zealand Wars figure Andrew Hamilton in the city that took his name.

As in Australia, the once unquestioned legacy of James Cook has again been challenged: having laid the groundwork for subsequent colonisation, he began the renaming of places – many still in use – and erasure of local knowledge and ownership.

In the UK, what started with the dumping of a statue of slave trader Edward Colston into Bristol harbour has grown into a “topple the racists” movement, complete with its own interactive map. After slaver Robert Milligan’s statue was removed, London Mayor Sadiq Khan ordered a review of London’s monuments. The Māori Party has made the same call here.

The imperial past is all around us

Defacing and removing statues is nothing new. Erected as markers of power and dominance in the landscape, they represent the ideas and actions of those commemorated.

It’s no surprise, then, that as regimes change, place names are written over and statues are toppled. Fallen monuments to Stalin, Lenin and Saddam Hussein provide dramatic 20th-century evidence of societies breaking from the past.

In Aotearoa-New Zealand, memorials to the most offensive colonial characters are just the tip of the iceberg. This is a place riddled with colonial markers – a nation where British imperial culture was stamped onto the landscape as a fundamental part of settlement.

Some Māori place names were allowed to survive, but often they were supplanted by old-world people and places. British heroes were feted for imperial conquest and domination, often for their roles in subjugating Māori, such as Marmaduke Nixon whose statue stands in Ōtāhuhu, Auckland.

The imperial master was copied, with the likes of Thomas Picton and Edward Eyre (currently being shamed) the rule rather than the exception when it came to naming places. Following in their mould, settlers who emulated imperial values were memorialised most.

But the current agitation is not just a flash in the pan from a woke generation, as Deputy Prime Minister Winston Peters implied. The storm has been brewing for the past decade, targeting historical figures whose legacies live on in the present. The Rhodes Must Fall campaign in Africa and Britain and the destruction of Confederate statues in the US were part of widely publicised anti-racist protests.

Removing history or rewriting it?

Arguments for and against removing statues and changing names tap into powerful forces.

On one side are those who assert they are hurtful, irrelevant and fail to represent contemporary diversity.

On the other are those who fear that effectively erasing historical evidence risks history repeating. By separating past from present, they argue, we can accept the behaviour of those cast in stone was and is reprehensible, but it should be seen in the context of its time, not erased because it offends modern sensibilities.

Others view the desecration of memorials as vandalism by those wanting to replace the past with propaganda.

Meanwhile, a heritage lobby preserves statues as art forms but shies away from critical consideration of how they represent the structure of past or present societies.

And, taking the threat personally, a militant and reactionary right wing seeks to protect and defend statues and place names.

Short of nature intervening, as it did when the Canterbury earthquakes toppled a number of colonial-era relics, what is the way forward?

One solution is to acknowledge these statues as an uncomfortable part of history and move them into museums and statue parks. Again, this is nothing new. Defunct Queen Victoria statues have ended up in a Quebec museum, Sydney shopping centre and in Indian storage. In Gisborne, a James Cook statue was relocated.

This allows their legacy to be discussed while simultaneously casting them as history. Statue parks with interpretation and graffiti boards would promote further discussion. This is common, too – Coronation Park in New Delhi, for example.

Revising street and place names is more difficult because transplanted colonial names are everywhere, although the promotion of Māori place names is rapidly gaining momentum already.

But in simply mimicking the removal of some of those explicitly responsible for colonial violence, Aotearoa-New Zealand risks falling in behind what suits elsewhere. The sun may be setting once more on the British Empire, but it’s the old empire leading the charge.

In this part of the world, reconsidering monuments and place names challenges the very foundations of settler societies and the evolution of race relations. The imperial past really is a different country, and we will have to do things differently here.