Move Over, G7—We're Going to Get the "Democratic Ten" Now 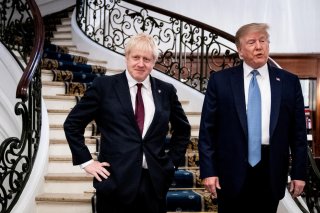 On 29 May, The Times reported that the British government was set to propose reforms to the G7, an organisation established in 1975 to coordinate policy between the world’s largest and most advanced market economies. The UK proposal involves creating a new coalition of democracies, based on the Group of 7, with the addition of Australia, India and South Korea. It would be known as the ‘Democratic 10’, or ‘D10’ for short.

A few days later, US President Donald Trump threw his support behind the idea while giving some off-the-cuff remarks to a scrum of reporters. ‘I don’t feel that as a G7, it properly represents what’s going on in the world’, he said. ‘We want Australia, we want India, we want South Korea’, he went on, before adding: ‘And what do we have? That’s a nice group of countries right there!’

Although Trump also said he wanted to invite Moscow, he indicated that Canberra, New Delhi and Seoul would be invited to attend the upcoming G7 summit, which the US is due to host in 2020. Britain and Canada quickly scotched the US president’s proposal to include Russia; Moscow went on to state its reluctance to become involved in any formation that doesn’t include Beijing. The G7 summit was supposed to take place in June, but it has now been postponed until later in the year due to Covid-19.

The D10 makes sound strategic sense. The G7 as a forum for the leaders of the world’s largest powers to discuss strategic economic matters has long been superseded by the G20 (in 2008 after the global financial crisis). And the G7, despite ejecting Russia in 2014 for invading Ukraine, has lost much of its geopolitical rationale, not least because world power is no longer so concentrated in the Euro-Atlantic region. The Indo-Pacific is now the cockpit of the global economy and the stage for international geopolitical competition.

Will the D10 fly? Perhaps. Reducing the G7’s Eurocentricity would almost certainly entice countries with Indo-Pacific flanks, such as Japan, the US, Canada and France (through its overseas territories). The British proposal may also prove attractive to the three prospective new members—Australia, India and South Korea—because they would get to join what would likely become the top table for the world’s leading democracies. It may even appeal to European countries like Germany and Italy by giving them a voice in a region they have little means to influence by themselves.

And what would the D10 do? For Britain, the D10 is, in part, about ‘decoupling’ from China. It is about creating a new coalition to provide an alternative to China’s attempts to dominate world markets and set international standards, particularly in relation to next-generation technologies such as 5G.

Beijing’s mishandling of the Covid-19 outbreak and subsequent attempts to revise the 1984 Sino-British agreement on Hong Kong have irked London tremendously. Only in March did the British government confirm that Huawei would be allowed to remain inside its 5G system, if only on the so-called periphery—despite fierce warnings against the move from the US and Australia. Since then, China’s actions, combined with mounting pressure from backbench Conservative parliamentarians, including the newly formed China Research Group, as well as opposition parties, have tried to persuade Prime Minister Boris Johnson to backtrack on the Huawei decision.

The UK may appear an odd architect for a new democratic alliance, particularly one centred on the Indo-Pacific. Despite its overseas territories in the Indian and Pacific oceans, and its military reach into the region, Britain is an Atlantic power. But does that necessarily matter?

As an established democracy, the UK has a track record of bolting together successful international endeavours. It played a key role in the formation of the maritime law, the United Nations and the North Atlantic Treaty Organization. It also put in place the Indo-Pacific’s only multinational security formation—the Five Power Defence Arrangements—which Japanese Prime Minister Shinzo Abe has suggested his country should join.

In any case, given the enormous and growing power that China could bring to bear against its adversaries, is it not time to think more strategically about the Indo-Pacific? Already, in terms of population, industrial yield and technological potential, China is the most powerful competitor the UK or US has ever faced. There is nothing to suggest that Xi Jinping—who became president for life in 2018—will cease his quest to dominate economically, technologically and strategically, as well as push back against liberal and democratic ideals. Are the other countries of the Indo-Pacific prepared?

The D10 should be embraced. It could start to consolidate the world’s leading democracies’ ability to uphold their autonomy and push back against authoritarian revisionists. It would help ensure that the Indo-Pacific of the 21st century remains free and open and does not become controlled and closed.

This article by James Rogers first appeared in The Strategist on June 16, 2020.