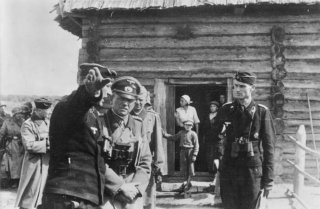 Here's What You Need To Remember: The assumptions that underlay the German war, and the arguments that justified it to the German public, made it nearly impossible to adopt the only strategy that might have had a chance of working. Knocking the USSR out of the war in the same way that they had knocked France out of the war was almost impossible given geographic reality.  Yet, by the end of 1941 Germany faced an unbeatable Allied coalition that swiftly undercut its ability to wage total war in the East.

Even by the standards of World War II, the Eastern Front stands out as a cauldron of horror. Over four years of war, millions of soldiers and civilians died as Nazi Germany and the Soviet Union pummeled each other relentlessly. Although the Germans inflicted serious damage in 1941 and 1942, the Red Army took the offensive in late 1942 at the Battle of Stalingrad, and slowly ground the Wehrmacht into dust over the course of the next three years.