Muslims and Migrants are Especially Vulnerable to COVID-19 in India 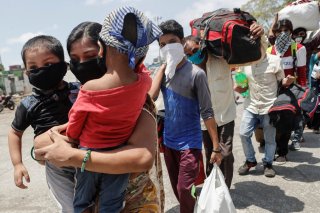 In India, the second most populous country in the world, the COVID-19 pandemic has exposed pre-existing fault lines of inequality and communalism, exposing current problems with the country’s political and social structures.

Prevailing political conditions in India were already unstable prior to COVID-19 and the government has been ill-equipped to deal with the public health crisis.

The ultra-nationalist Indian government under Narendra Modi passed the controversial Citizenship Amendment Act in December that guaranteed fast-track citizenship to some minority groups from neighbouring countries but explicitly barred Muslims from it.

In August 2019, Article 370 of the Indian constitution that extended special status to the Muslim majority state of Jammu and Kashmir was scrapped, and a communications blackout was imposed that has continued to this date.

With the help of these two policy and legislative moves, the current Indian government has been successful in creating an entire underclass of citizenry, mostly Muslims.

I would argue that the current administration has bestowed upon itself what Cameroonian philosopher Achille Mbembe called necropolitical power: the capacity to dictate who may live and who must die.

In India, this power is particularly reinforced amid the COVID-19 crisis.

India’s Modi government has been successful in scapegoating, discriminating against and repressing minorities. This has enabled conditions that could expose many minorities to a greater threat from this crisis.

The coronavirus pandemic has further reinforced pre-existing societal divisions. The poor who are unable to practise social distancing have become targets for the spread of COVID-19 as they gather in large groups for basic necessities. Pandemic anxiety in the country has also manifested in bigotry and prejudice against Muslims who have been blamed for the spread of the virus.

The Indian administration has also used the pandemic as an opportunity to crack down on political dissidents. Lockdown measures in the country have also led to the sudden displacement of migrant workers from large urban centres.

India’s manoeuvres during the pandemic have reached totalitarian levels that continue to feed into its nationalist agenda. Islamophobic tropes are evident from the manner in which the spread of COVID-19 in the country has been framed along religious lines.

Contrary to many calling the pandemic a great equalizer, the crisis has led to formulations of the dangerous other. It has created elemental fears of the pandemic that is squarely blamed on specific communities. Many Muslims have also been reportedly turned away from testing centres and health clinics due to such fears.

Demonization of the poor

India’s response to the pandemic has also increased the demonization of the poor who are at the mercy of the state’s draconian policy moves. In a country, where more than 90 per cent of the workforce is involved in the informal or “unorganized” sector of the economy, the pandemic has added greater uncertainty to the future of many who were put out of work

Migrant labourers in the country have been caught in an intractable state of limbo as they attempt to get home by any means possible. Migrant workers represent the inextricable lifeline of many cities in India. Domestic labourers include restaurant workers, construction workers and taxi drivers, and Indians have witnessed their ubiquity during the COVID-19 crisis.

But the pandemic has also exposed the complex realities of many labourers who barely survive in a country that is wedded to neoliberal globalization and the hazards of late-stage capitalism. They have been viewed solely as a means of capitalist exploitation and sites of extraction.

The rampant disregard for the poor and their welfare is also on display with the way they are being dealt with by law enforcement amid coronavirus lockdowns. Migrant labourers who are attempting to escape joblessness and hunger are being sprayed with disinfectant and brutalized.

Many labourers, in their attempt to leave large urban centres to reach their homes in rural India, have been compelled to undertake perilous journeys on foot and have died since the lockdown measures were implemented.

The response to the pandemic has failed to acknowledge the welfare of many people on the margins in India, and has consistently subjected them to systemic regimes of discrimination and government regulation.

Minority groups and many on the verge of economic destitution have been placed in a regime of hierarchy that illustrates the government’s ability to regiment and justify the marginalization of the less fortunate.

Minority groups in India have carried the burden of embracing the realities of ultra-nationalist and capital-focused agenda of nation-building. During times of crises, large factions of India’s population have chosen to scapegoat and demonize the other.

The apathy and contempt for those on the margins is evident from the level of impact the crisis has had on minorities. In a country that is administered by divisions and fragmentation, minorities are perpetually vulnerable. Some Indians have also expressed an entrenched sense of derision and an inability to empathize with those who face such barriers.

The unfortunate reality of this pandemic is that it takes a crisis of this magnitude to lay bare the deep inequalities that have persisted for years in India. It is critical that a greater transnational solidarity is built to overcome this crisis with empathy and compassion.