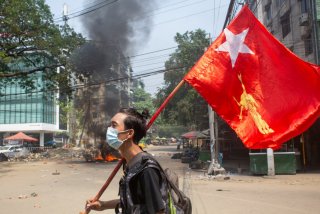 Here's What You Need To Remember: The NLD may not even feature in Min Aung Hlaing’s electoral utopia as he knows it will not run in the August 2023 elections that will be almost certainly unfree, unfair, and rigged — even if he does not disband it.

The Myanmar military junta seems to be here to stay after extending its emergency rule until at least until August 2023. But what does it plan to do in the next two years?

On 1 August, the chief of the Myanmar military (the Tatmadaw), Senior General Min Aung Hlaing, has endowed himself as chair of the State Administration Council and Prime Minister of the caretaker government he formed. Min Aung Hlaing possesses executive, legislative and judiciary powers under the one-year emergency rule, which was declared when the Tatmadaw took power on 1 February.

Until late July, Min Aung Hlaing’s immediate targets were protesters, the National Unity Government (NUG) and its People’s Defence Force. The NUG’s declaration on 7 September of an all-out people’s defensive war intensified the Tatmadaw’s repression of the NUG and their supporters. Min Aung Hlaing’s paramount political aim is to destroy the credibility of the 2020 election result and hold another election.

In the 2020 election — internationally accepted as free and fair — Aung San Suu Kyi’s National League for Democracy (NLD) won 393 out of 476 seats at the Union level. The Tatmadaw’s proxy Union Solidarity and Development Party (USDP) obtained a meagre 33 seats.

Alleging irregularities, vote rigging and the NLD’s use of undue powers, the junta-appointed election commission nullified the results of 2020 elections on 26 July. The commission even contemplated disbanding the NLD — the junta’s political nemesis since the 1990s. But the Tatmadaw may not be bold enough to pursue this line of action against China’s wishes.

Why does Min Aung Hlaing seek another election, despite the Tatmadaw’s deep unpopularity? One plausible answer is that the Tatmadaw is only using it as a delaying tactic to stay in power until August 2023, as it did for 23 years in the 1990s and 2000s when generals used the lack of a ‘democratic’ constitution as an excuse.

Will the junta transfer power back to the winner of the next election, as they have promised since the coup, and go back to where they were before — within the bounds of the 2008 constitution? In a worst-case scenario, the junta may just officially announce a coup at the expiry of the emergency in August 2023 and rule by decree onwards.

But looking at Min Aung Hlaing’s words on 23 August, it seems a relatively less distressing scenario is unfolding.

Min Aung Hlaing alleged inequality in the voting powers of the Pyithu Hluttaw (lower house), with 440 seats, and the Amyotha Hluttaw (Upper House), with 224 seats, when the two houses meet and vote as a bicameral body over laws and other matters. The Tatmadaw occupies a quarter of the seats in both houses, but it now seeks to equalise the seats in both houses, which will have a significant impact on its ability to control parliamentary votes in the future.

Min Aung Hlaing also said that a more proportionally representative electoral system would better suit Myanmar than the present majoritarian system. Some point to the present system for the USDP’s big losses in 2015 and 2020. A more proportional election system will not necessarily create victory for the Union Solidarity and Development Party or big, popular ethnic parties, but it may help smaller and relatively popular ethnic parties.

Min Aung Hlaing’s words reflect the Tatmadaw and USDP’s belief — which many other smaller political parties share — that the majoritarian system was the cause of the NLD’s landslide victories in 2015 and 2020. So the Tatmadaw may seek to establish or sponsor smaller political parties to gain control of more seats under proportional representation. Min Aung Hlaing’s appointment of the National Democratic Front party’s Khin Maung Swe to the State Administration Council is illustrative of such intentions. The National Democratic Front party, among others, has called for proportional representation since 2012.

In Min Aung Hlaing’s thinking, the seats of political parties allied with the Tatmadaw, when combined with the Tatmadaw’s unelected seats in parliament, may become a powerful voting bloc. They could prevent popular parties such as the NLD from dominating the lower house, upper house or bicameral parliament again. The NLD may not even feature in Min Aung Hlaing’s electoral utopia as he knows it will not run in the August 2023 elections that will be almost certainly unfree, unfair, and rigged — even if he does not disband it.

It is still too early to say what will materialise out of Min Aung Hlaing’s orders. But we should not lose sight of his signals.

Nyi Nyi Kyaw is Fellow at the Kulturwissenschaftliches Institut, Essen, Germany. He is grateful to the University of British Columbia and the International Development Research Centre’s Knowledge for Democracy Myanmar initiative for supporting the research for this piece.

This article was originally published in East Asia Forum.