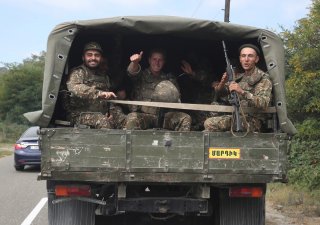 The latest flare-up in fighting between Armenian and Azerbaijani forces that began in July and escalated in mid-September comes closest to the full-scale conflict that ensued between them in the late 1980s and early 1990s as the Soviet Union was disintegrating. It was centred on Nagorno-Karabakh, a predominantly Armenian enclave situated within the boundaries of the Azerbaijan Soviet Socialist Republic that formed a part of the Soviet Union from 1922 until 1991 when Azerbaijan declared independence. The conflict was triggered by the attempt on the part of the Armenian leadership in Nagorno-Karabakh to break away from Azerbaijan and join Armenia, which also emerged as an independent state following the Soviet Union’s demise.

The war ended with a ceasefire in May 1994 at the cost of 30,000 dead and hundreds of thousands rendered homeless. It not only left Nagorno-Karabakh as a de facto independent polity ethnically cleansed of its Azerbaijani minority but also additional Azerbaijani territory surrounding the enclave under Armenian control.

Observers attributed the Armenian victory to Russian military support that turned the tide against Azerbaijan. Despite the efforts of the Minsk group chaired by Russia, France and the United States to broker an agreement between Armenia and Azerbaijan over the future of Nagorno-Karabakh, the dispute has continued to fester for a quarter of a century with occasional bursts of limited armed conflict, the most serious before the latest one occurring in 2016.

The Armenian antagonism toward Turks—and Azerbaijanis are Turkic people with close cultural ties to Turkey—runs deep. The mass displacement and death of Armenians in Anatolia during World War I as a consequence of part of the Armenian population siding with Russia intensified anti-Turkish feelings among Armenians. This ethnically based resentment was channelled also against neighbouring Azerbaijani Turks.

This interethnic hostility was exacerbated by Moscow’s policy towards the Caucasus and Central Asia that deliberately aimed at creating tensions between neighbouring ethnic groups in non-Russian, especially Muslim, parts of the USSR. This policy, first developed under Stalin, was aimed at preventing the emergence of coordinated resistance in these regions against Moscow’s heavy-handed rule, including the Russification of the non-Russian population.

Central Asia abounds in examples of this policy. Minority ethnic groups are strewn throughout Central Asian states as a result of incorporation of enclaves of such groups within ethnically defined and denominated states. Nagorno-Karabakh’s inclusion within Azerbaijan was one example of deliberate mixing of hostile ethnicities in the Caucasus with the same goal in mind.

The lid was kept on Armenian–Azerbaijani hostility, especially in Nagorno-Karabakh, as long as both Azerbaijan and Armenia formed part of the Soviet Union. However, with the disintegration of the USSR, interethnic antagonism resurfaced with greater vigour, leading to the war between the two countries that lasted until 1994.

It’s not clear why the conflict has reignited now after having been dormant for more than two decades. There’s speculation that it could have as much to do with internal challenges to both regimes that have prompted them to create nationalist xenophobia to divert the anger of their populations.

Both sides have blamed each other for starting the fighting, which has now spread beyond the Azerbaijani border with Nagorno-Karabakh to the international boundary between the two countries. The president of Azerbaijan and the prime minister of Armenia have rejected suggestions of talks to bring the conflict to a close despite such calls by the United Nations, Russia and the United States.

The conflict has raised concerns about the stability of the South Caucasus region since major pipelines carrying oil and gas to world markets traverse this area. The South Caucasus Pipeline, also known as Baku–Tbilisi–Erzurum Pipeline, carries natural gas from the Shah Deniz gas field in the Azerbaijan sector of the Caspian Sea to Turkey. It runs parallel to the Baku–Tbilisi–Ceyhan oil pipeline that carries oil from the Azeri–Chirag–Deepwater Gunashli field and condensate from Shah Deniz across Azerbaijan, Georgia and Turkey to the Ceyhan marine terminal on the Turkish Mediterranean coast. Crude oil from Turkmenistan and Kazakhstan is also transported via this pipeline.

Equally, if not more, alarming is the danger that if the confrontation escalates it may draw in external powers, Turkey and Russia in particular, that would widen the scope of the conflict. Turkey has traditionally been a staunch supporter of Azerbaijan and condemned Armenia in no uncertain terms for beginning the conflict when fighting broke out in September. Russia considers Armenia a strategic ally, supported it militarily in earlier bouts of fighting with Azerbaijan and is treaty-bound to come to Armenia’s defence if the war spreads beyond Nagorno-Karabakh across the international frontier. But, it also considers Azerbaijan a strategic partner and has supplied arms to Baku. Russia will therefore have a major problem on its hands if the conflict escalates. Moreover, if Russia and Turkey line up on opposite sides of this conflict it will greatly harm Russia’s attempt to woo Turkey away from NATO, especially since the two countries are already supporting opposing camps in Libya and Syria.

Israel and Iran also have stakes in the conflict. Israel is a major supplier of arms to Azerbaijan, and Iran, despite its attempt to appear neutral, has long supported Armenia. Both Iran and Azerbaijan are Shia but Azerbaijan’s irredentist claim after independence on the northern Iranian provinces of East and West Azerbaijan has more than neutralised their religious affinity.

There are too many external fingers in this Caucasus pie and unless this fire is doused quickly it has the potential to turn into a major regional conflict.