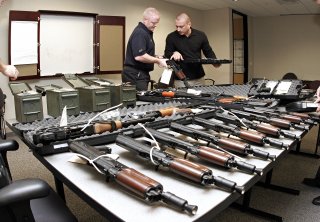 Here's What You Need to Remember: The bag was turned over to the Bureau of Alcohol, Tobacco, Firearms and Explosives after it was recovered from the scene and transported to Eagle Pass South Station by Border Patrol agents.

AU.S. Army National Guard Soldier stationed less than three-miles from the Mexican border discovered an abandoned black gym bag full of guns. Four of the eight weapons had been reported stolen prior to the discovery.

“This is the second time our agents encountered abandoned weapons and ammo in this area,” Del Rio Sector Chief Patrol Agent Austin L. Skero II said in a Friday statement.

“It’s critical that our agents stay alert to all threats and work with our partners to stop criminal organizations from entering our communities.”

The bag contained eight AK-47-style pistols along with 10 30-round magazines. The weapons are classified as pistols instead of rifles, despite the AK-47 design, because of their short barrels (usually under 16 inches) and lack of buttstock. AK-style pistols retain much of the functionality of the full-sized weapon while being easier to conceal and transport.

Related: BEHIND THE DEADLY RISE OF THE CHINA-MEXICAN CARTEL ALLIANCE

The bag was turned over to the Bureau of Alcohol, Tobacco, Firearms and Explosives after it was recovered from the scene and transported to Eagle Pass South Station by Border Patrol agents.

It remains unclear which unit the Soldier who discovered the bag belongs to, but there are currently around 3,800 National Guard troops stationed along America’s Southern border in support of various Border Patrol and Law Enforcement operations. While deploying National Guard troops to the Mexican border is not out of the ordinary, these deployments saw a significant uptick in personnel, and accompanying media scrutiny, after President Trump declared a national emergency on the border in February of 2019.

According to Military.com, there are currently some 20,000 National Guard troops deployed overseas, with 32,000 more supporting pandemic relief efforts within the United States, and at least another 2,300 supporting security missions like protecting the U.S. Capitol building.