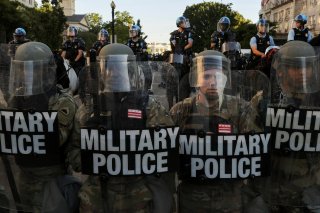 Some of the D.C. National Guard troops who were deployed to protests in the nation’s capital tested positive for coronavirus, a spokeswoman said.

The troops tested positive on Tuesday after they were deployed to assist local law enforcement on May 31, D.C. National Guard spokeswoman Air Force Lt. Col. Brooke Davis told McClatchy DC. It was not immediately clear how many troops tested positive, but officials said they “believe it is not currently a large number.”

There were 1,300 D.C. National Guard members deployed along with National Guardsmen from 11 other states, according to McClatchy DC and the New York Post. It was not possible to maintain proper social distancing during the protests, and a number of the troops were not wearing face coverings.

“The administration worried that yelling protesters would negate the health benefits of wearing a mask,” Birx said during the call, according to The Daily Beast, which obtained a recording.

The destruction of various testing sites at protests might set back containment efforts, and governors should “scramble now to make sure there is testing available in urban areas,” she added.

Vice President Mike Pence said an increase in confirmed cases associated with the protests are an “issue our team is following and there is a concern,” The Daily Beast reported.