A NATO In Asia? Not Going to Happen 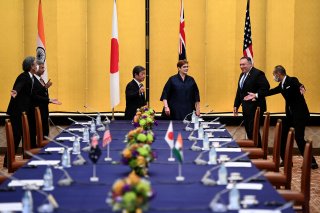 After Secretary of State Mike Pompeo completed his Asian tour in October, many observers labeled this tour as “anti-China.” He attended the Quadrilateral Security Dialogue (Quad) conference in Tokyo and visited states with shared security concerns about China like Vietnam. This tour brought more discussion about the role of Quad in East Asian national security. Prime Minister Abe initiated Quad in 2007 as “an Asian arc of democracy” to contain China. But different interests among its members contributed to its collapse in 2008. Later, Japan, Australia, India, and the United States revived Quad in 2017 to secure a “rules-based order in the Indo-Pacific.” With China’s growing power and assertiveness, many suspect Quad as the first step toward a North Atlantic Treaty Organization (NATO)-like alliance in the Indo-Pacific. However, a comparison between American security establishments in Europe and Asia shows that a multilateral alliance in Asia is unlikely to emerge.

Since the end of World War II, the pillar of the American-led security system in the Asian-Pacific has been the San Francisco system. The biggest difference between the San Francisco system and NATO is that the multilateral nature of NATO constructs a conflict-resolution institution among its members. The first article of the NATO Treaty calls all members to settle their disputes in peaceful manners. Article Nine establishes the NATO Council, which brings all members together to discuss security problems. This provides an institutionalized mechanism for members to raise and negotiate concerns. The NATO Council itself acts as a broker to resolve potential conflicts. In contrast, the San Francisco system lacks a formal conflict-resolution mechanism because it is a group of bilateral treaties. There is no common platform for American allies in Asia to discuss their security interests. As a result, the United States lacks the means to coordinate conflicted interests and perceptions among its regional partners.

There are two main reasons behind the lack of multilateralism in the Asian-Pacific. First, many American partners in Asia are not “normal” states with full sovereignty. Japan delegates its security policy to the United States, while the Korean military is under joint command with the American force. Taiwan, a de facto American alliance, is not even formally recognized by the United States as an independent state. A single security organization that considers these differences is nearly impossible. Thus, the United States uses bilateral treaties to expedite military coordination.

Second, bilateral treaties in East Asia give the United States more influence over its allies. Washington and its Asian allies share security interests, such as promoting regional stability and encountering Chinese and North Korean threats. However, there are conflicts of interest among them. For example, both Japan and Korea refuse to increase their share of defense spending. They also have strong economic ties with China, which they do not want to jeopardize over the Sino-American strategic conflicts. A multilateral treaty would allow Japan and Korea to resist the American pressure jointly. Bilateral treaties ensure that the U.S. can deal with them separately. Thus, this arrangement maximizes American leverage over its Asian allies.

The confrontation between Japan and Korea symbolizes the failure of conflict-management mechanisms. In 2019, a South Korean court ruled that Japanese companies must compensate Korean survivors of forced labor that occurred in World War II. Japan rejected this request and maintained that both countries' normalization in 1965 resolved all issues of compensation. This historical dispute quickly spiraled into a trade war. Japan placed export restrictions on chemicals and other products vital for South Korean semiconductor and electronics industries. In retaliation, Seoul terminated the military intelligence sharing treaty with Japan; it would cease to share information on North Korean activities with Tokyo.

One inherent reason behind the Japan-Korea conflict is that neither country is “normal.” Thus, politicians in both countries have no accountability in practicing nationalistic foreign policies. In a normal state, politicians who practice nationalistic foreign policies must balance between domestic political gains and diplomatic losses. However, in both Japan and Korea, nationalism toward each other inflicts few security losses. Politicians in both states understand that the United States will rescue them during any war. Therefore, they can appeal to nationalism for political gains without bearing the cost of diplomacy.

The failure of consensus-building also makes the Korea-Japan conflict unsolvable. One might think that a common threat from North Korea could force Tokyo and Seoul to put common security concerns ahead of historical disputes. However, the two states have a different perception of this threat. The Moon administration returned to the Sunshine policy and reduced threats from North Korea through negotiations and aid. Meanwhile, Japan felt a severe threat from North Korea’s increasing nuclear and missile capabilities. Thus, Tokyo and Seoul failed to build consensus because of their different threat perceptions.

Beijing fears a multilateral alliance against China in Indo-Pacific might emerge from Quad. Such an organization is destined to fail because it cannot overcome the lack of multilateralism. First, the abnormal status of some American allies will challenge the alliance. For example, the United States would exclude Taiwan because of Washington’s affirmation of the One-China policy. However, leaving Taiwan out of the security alliance might send a wrong signal. It could provoke military actions from China because Beijing might read it as an American retreat from the Taiwan Strait. Second, the lack of shared priorities will make policy coordination nearly impossible. Different members have different priorities regarding China. Tokyo and Seoul are unlikely to jeopardize their relations with Beijing for New Delhi’s border claims. Each member has its own economic and political ties with Beijing, which it does not want to lose. The problem of policy coordination allows Beijing to break the alliances one by one.

A multilateral organization like Quad is not useless. It provides a forum for members to address their shared concerns and put pressure on Beijing jointly. Furthermore, communication opens additional bilateral cooperation opportunities among members. However, a NATO-like alliance is unlikely to emerge anytime soon.

Zhuoran Li is an M.A. candidate in International Relations at the School of Advanced International Studies (SAIS), Johns Hopkins University. He received his B.A. in Foreign Affairs and East Asian Studies at the University of Virginia.