"NATO, Nukes, and Nazis:" Inside the Most Insane World War III Game Ever Made 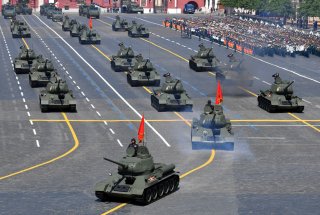 Here's What You Need To Remember: What's fascinating about NATO, Nukes & Nazis is how it combines kooky alt history with plausible military analysis and a sophisticated conflict simulation.

It’s 1990, and the Third Reich lives. Ever since World War II ended with a compromise peace between Germany and the Allies, the Cold War has been waged between the Nazis and NATO.

But the German economy has soured. And, just as in 1939, Germany is going to conquer its domestic problems by conquering Europe and then the world. As waves of Nazi flying wings and super-heavy tanks surge into France, the only force standing between them and global domination is NATO. Will western Europe fall under Nazi barbarism, or will enough U.S. divisions cross the Atlantic in time to stop the Third Reich in its tracks?

Welcome to NATO, Nukes & Nazis, the craziest World War III war game you’ll ever play on your dining-room table. It may sound like some skinhead fantasy of a World War II do-over, but the title of the game originated in the late 1970s, when a couple of hobby war game designers decided that that the only games that war gamers were interested in at the time were about World War II or a hypothetical NATO-versus-Warsaw-Pact conflict.

So why not combine both topics into the same game? The Third Reich would essentially take on the role of the Warsaw Pact in an invasion of western Europe. Thus a game where U.S. air cavalry and Israeli paratroopers battle SS panzer divisions.

Why in God’s name would anyone want to play such a game? For the same reason that people love alternate-history movies like The Final Countdown, or alternate-timeline books such as those by Harry Turtledove, or just play historical games in general. They give us the chance to explore what might have been.

What's fascinating about NATO, Nukes & Nazis is how it combines kooky alt history with plausible military analysis and a sophisticated conflict simulation. There are two versions of NATO, Nukes & Nazis: the original and now out-of-print board game published by XTR Corp in 1990 (you might find a copy for sale here) and a new 2016 edition—NATO, Nukes & Nazis 2—available from One Small Step Games.

Let’s start with the 1990 game, which is by far the zanier and more interesting of the pair. Designers Joe Miranda and Ty Bomba came up with a remarkably detailed and thoughtful five-page backstory. In a nutshell, history turned out like this: after the Stalingrad disaster, Hitler is overthrown and industrial czar Albert Speer and the German generals take power. The Red Army is decimated at Kursk in 1943, allowing the Germans to transfer their panzer armies to the west, just in time to win the Battle of the Bulge.

Meanwhile, German jet fighters and surface-to-air guided missiles blunt the Allied strategic-bomber offensive. Stalin is overthrown by Zhukov. The Americans drop the first atom bomb on Dusseldorf rather than Hiroshima, but that’s enough to induce Japan to surrender. The exhausted combatants agree to make peace, with the Germans withdrawing from most of western Europe (they do keep Denmark), the Soviets giving up much of western Russia, and the eastern European nations becoming German satellites. A non-Communist Russia joins NATO. The Cold War stays cold, until the Germans decide that it’s time for the “master race” to assert its rightful destiny. . . .

Whoa! Does all this even matter? Just pretend that Hitler’s brain was spirited away to Argentina in a pickle jar and then resurrected. It all boils down to simulating an alternate World War III, with Nazi Germany taking the place of the Soviet Union.

NNN is played on a three-by-two-foot map, divided into hexagons, of western Europe stretching from Britain in the northwest, south to Switzerland and east to central Germany. The Soviet Union isn’t represented in the game, apparently because the Eastern Front was to be featured in a never-published sequel, along with an expansion for World War III in East Asia (naturally titled Nippon, Nukes and Nationalists).

NNN comes with four hundred half-inch-square pieces representing divisions, brigades and air units, colored gray-green for the Wehrmacht (regular German army) and black for the SS. NATO is a rainbow of colors for the Americans, British, French, Belgians, Spanish, Turks and Israelis, as well as neutral Sweden, Switzerland and Ireland. Ground units are rated for their attack, defense and movement capabilities; aircraft for their air superiority, ground support and interdiction values.

Players alternate turns, with each player mobilizing reinforcements and replacing destroyed units, and then moving ground and air units (with the opposing side given a chance to intercept with their air force). Then comes combat, which is resolved by rolling dice and consulting a chart, and then exploitation movement to take advantage of a breakthrough. At the end of each turn, dice are rolled to determine next turn’s weather, and more dice are rolled on a Politics table for random events (one outcome of which is German units are sent to the Eastern Front, simulating the impact of the Russian army). The winner of the game is based on Victory Points awarded for actions such as capturing cities and eliminating enemy units.

What’s fascinating about the original NATO, Nukes & Nazis is the juxtaposition of World War II and 1980s warfare. It’s as if the Battle of the Bulge met Desert Storm. The game has a fairly sophisticated combat model of twentieth-century mechanized conflict. Airpower can strike enemy ports and airfields, and interdict supply lines. Air transports can do strategic airlifts, paratroopers can drop behind enemy lines, and marines and commandos can perform amphibious assaults. Partisans can pop up in German-occupied territory, and the Nazis can conduct terror attacks to eliminate them, but doing so only generates more guerrillas (some things never change). NATO can perform denazification, as the Allies did in World War II, to purge the swastika from captured German cities. But in this game, Germany has Stormtrooper units to “nazify” captured Allied cities, a concept both logical in theory and totally bizarre to imagine.

NNN depicts the influence of late Cold War technology through helicopter-borne troops that can conduct airmobile assaults. The Nazis also have ballistic missile brigades, while NATO has electronic-warfare units to disrupt Nazi air and missile strikes. And, of course, there are rules for nuclear weapons that create contaminated zones but give Political Points to your opponent when used. Not surprisingly, only the Nazis can drop atomic weapons on hexes containing their own troops, to create an instant obstacle for NATO.

But it’s really the weird stuff that makes NATO, Nukes & Nazis so colorful. The Nazis have Flying Wing squadrons that gain an advantage in air-to-air combat, as well as Superheavy Panzer units that boost German ground attacks. SS divisions get a “fanaticism” bonus when attacking NATO troops, which results in bloodier losses on both sides. But when Israeli troops attack SS units, the Israelis get the fanaticism bonus—you bet they do!

Miranda realized while researching the game that if the Nazis had won the war, they would have covered Europe with all sorts of grandiose monuments; Hitler himself was a frustrated architect who loved to sketch massive, ugly structures that would be his “gift” to the world. In this alternate Europe, Germany is dotted with concrete monstrosities such as the Lebensborn complex (which breeds extra SS troopers), the Super Volkswagen factory and the Cathedral of Ice. But German morale crumbles if the Allies capture these sites.

To add to the craziness, NNN has a Political Index. Every turn, dice are rolled to see which random events occur, such as Nazi infighting that precludes SS and regular German army units from cooperating in combat, neutrals such as Turkey and Ireland entering the war (the Irish can end up fighting either for or against the Nazis), or the Arab League attacking Israel, which limits Israeli forces fighting for NATO in Europe.

NATO, Nukes & Nazis 2, the 2016 edition, is rather a pale imitation of the original. Gone is much of the gonzo alternate history, in favor of a simpler game in a somewhat different world than the 1990 edition. The premise here is that Nazi Germany survived to create its own Warsaw Pact in eastern Europe and the Balkans (in fact, the rules actually refer to the Nazi alliance as the Warsaw Pact!). The Soviet Union, now a truncated non-Communist Russia, has joined NATO. There are two maps in the new version instead of the single map of the original, with the addition being an Eastern Front map that extends the board all the way to Moscow.

Thus the political alignments are a bit different. As they did in their invasion of the Soviet Union in 1941, the Nazis have auxiliary units of Belorussian, Estonian, Latvian, Lithuanian, Romanian and Ukrainian troops. NATO loses some minor powers like the Canadians and Israelis, but it does get the massive Russian army with its powerful artillery divisions. The result is a World War III game that feels more like World War II simulation, with the Third Reich again stretched between two fronts.