Navalny's Imprisonment Could Backfire on the Kremlin 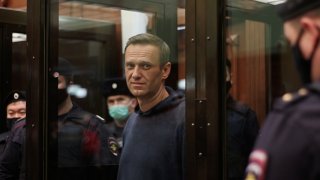 Russian opposition activist Alexei Navalny was today sentenced to two years, eight months in a prison colony for violating the probation terms of a suspended sentence on a 2014 conviction, which he claims was politically motivated.

This comes on the heels of a second weekend of unauthorised protests in which thousands of Russians took to the streets in support of Navalny.

This is an important moment for Russia. Now that Navalny faces a lengthy prison term, he could become a potent symbol of a lawless regime that is afraid of its people — and further energise the opposition.

To counter this, the Kremlin will seek to paint Navalny as a dangerous symbol of Western meddling in Russian politics.

The success of these competing messages will play a critical role in determining whether the opposition will be able to maintain its momentum moving forward.

For many years, Russia has been an unusual place for opposition politics. Despite dominating the messaging on traditional TV and (most) print media, the Kremlin has allowed a degree of free speech online. Navalny has taken advantage of this freedom, exposing high-level corruption first as a blogger and now as head of Russia’s leading anti-corruption organisation.

He and his team have produced voluminous reports and slickly produced viral videos detailing corruption at the highest levels of Russian politics. These videos have generated millions of clicks.

But last year it appeared this uneasy truce between the Kremlin and its online opponents was breaking down. Putin’s approval ratings fell to historic lows amid a stagnating economy and the government’s dysfunctional response to COVID.

In response, the Kremlin launched a large, stage-managed constitutional reform process aimed at projecting the image of strongman governance as the only way to avoid growing threats from a hostile Europe and United States.

In addition, the Kremlin has ramped up its targeting of government critics and human rights groups by pushing its claims they are “foreign agents” and restricting their operations. Navalny and his Anti-Corruption Foundation have also faced growing harassment.

Then, in August, Navalny was poisoned while visiting regional Russia to promote his “smart voting” system, which helps Russians vote tactically for opposition candidates, depriving the ruling United Russia party of votes and weakening its monopoly on power.

Perhaps anticipating his arrest after returning from Russia from his convalescence in Germany, Navalny personally appeared on YouTube describing a highly detailed report of a US$1.3 billion dollar palace allegedly built for Putin on the Black Sea.

This video has now been viewed more than 100 million times and has transformed the palace’s 700-euro toilet brushes — four times the average monthly pension in Russia — into a symbol of the protests.

Western agent or symbol of a new form of politics?

The government will seek to downplay his symbolic importance. For his part, Putin still refuses to call Navalny by name and has recently referred to him as “the Berlin patient”.

And to the extent the official state media do mention Navalny, the Kremlin has increasingly tried to characterise him as a Western agent intent on weakening Russia and unleashing revolutionary chaos.

This image of Navalny fits with the Kremlin’s overall narrative that Russia is under threat from a hostile West seeking to undermine its stable development. This message has ironically been strengthened by European Union and US threats to impose additional sanctions on Russia for jailing Navalny.

The long-term success of this narrative in Russia, however, remains unclear. In contrast with Europe and the US, where Navalny is rapidly assuming the unambiguous status of “oppressed Russian dissident”, Russians have mixed views on Navalny. Many are uncertain whether they would vote for him if he could run for president. Others worry about his nationalist background.

But the protests suggest Navalny could come to symbolise something far more problematic for the Kremlin.

His jailing could galvanise Russians who want a form of politics no longer characterised by post-imperial nostalgia and a paranoid, siege mentality that constantly fears Western interference. Instead, they want to live in a country focused on building better schools, infrastructure and health care.

The protests show this narrative is particularly popular among young people, who ignore state media and instead get their news from social media posts that combine dark humour with criticism of the regime.

Some of these videos have sampled songs by activist musicians, such as IC3Peak’s Death No More, which mixes hard-core electronica and images of the singers pouring kerosene on themselves in front of government buildings and eating raw meat outside Vladimir Lenin’s tomb.

Further, the recent protests show this narrative is also gaining traction in regional cities in Siberia and the Far East, which have suffered from the Putin regime’s centralisation of power and money in Moscow over the last 20 years.

Finally, this narrative is popular among women. Navalny’s organisation is cultivating a new generation of female leaders and supporters, many of whom want to break away from the macho, strongman politics of the Putin era.

As Navalny (and many of his team) sit in jail, he is a reminder of the hypocrisy of many of the Russian political elite, who claim to be protecting Russian sovereignty, but own vast amounts of property in Europe.

The future of the protest movement

If the Kremlin successfully paints Navalny as a foreign agent who will only bring instability to Russia, the jailed activist may retreat from public view. If he does, the opposition will once again fail to place serious political pressure on the Kremlin.

But if Navalny comes to symbolise unjust oppression in the face of an increasingly corrupt, unaccountable and incompetent political elite, popular pressure will only increase on the Russian government.

It could take years for this narrative to gather steam. But if it does, Navalny will likely be correct when he stated in a recent court hearing,

right now brute force is on the state’s side, but that will not last forever.