The Navy’s SM-3IIA Missile Is Such a Big Deal: Here's Why 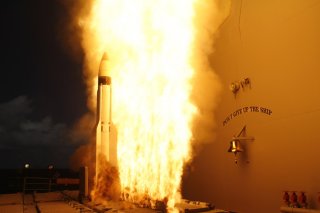 Here's What You Need to Remember: This missile can shoot down nuclear ICBMs and features several major advancements.

History was made on November 16 when a U.S. Navy destroyer eliminated an intercontinental ballistic missile (ICBM) target for the very first time, a development which may well usher in a new era in integrated missile defense. Using an Aegis Ballistic Missile Defense System, the destroyer knocked an ICBM-type target out of the sky over the Pacific Ocean Northeast of Hawaii.

The successful test used an upgraded SM-3 IIA, which is a larger, more precise high-tech SM-3 variant when compared to previous SM-3 variants.

SM-3 missiles, first deployed on Navy ships and now land-fired as well, are exo-atmospheric interceptor missiles designed to destroy short and intermediate range incoming enemy ballistic missiles as they approach the boundaries of the earth’s atmosphere while traveling from space. While they have for many years been proven effective against short, medium and long-range ballistic missiles, the SM-3IIA has now shown an ability to destroy ICBMs traveling through space.

“We have demonstrated that an Aegis BMD-equipped vessel equipped with the SM-3 Block IIA missile can defeat an ICBM-class target, which is a step in the process of determining its feasibility as part of an architecture for layered defense of the homeland,” Missile Defense Agency Director, Vice Admiral Jon Hill said in a statement.

“This first-of-its-kind test shows that our nation has a viable option for a new layer of defense against long-range threats,” Bryan Rosselli, vice president of Strategic Missile Defense at Raytheon Missiles & Defense, said in a written statement.

Rosselli’s comment about a new layer of defense seems significant, given that an ICBM-killing SM-3IIA may be able to hit ICBMs in locations or at times where a larger Ground Based Interceptor could not perform an intercept. The mid-course phase of when an enemy ICBM travels, the portion of its flight where it is traveling through space, affords the most opportunities for intercept as it is by far the longest period of time or “window” in which to destroy the enemy target.