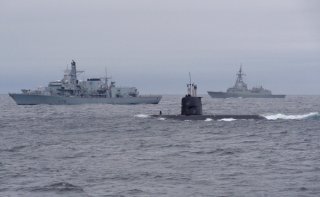 Here’s What You Need to Remember:  The secret is approaching the problem with the intention of building a submersible aircraft.

America’s special operations forces use a wide variety of vehicles to conduct their covert operations, but few are as dramatic as the Navy’s recent efforts to field a flying submarine that could ferry operators into and out of the battlespace quickly and stealthily.

To date, there has been no evidence to suggest that such a platform is in current operation, but Navy documents from 2010 clearly show that not only was the branch seriously investigating this concept, they concluded that the idea was entirely feasible with the existing technology of the day: “The submersible aircraft study combines the speed and range of an airborne platform with the stealth of an underwater vehicle by developing a vessel that can both fly and submerge.”

Could Navy SEALs and other special operations units be operating stealthy flying submarines already? It seems unlikely–but based on the Navy’s research, it may only be a matter of time before this concept does come to fruition.

Today, the U.S. Navy’s premier special operations unit, the SEALs, leverage a number of submersible vehicles for these sorts of clandestine infiltration and exfiltration operations, alongside a variety of other mission sets. These SEAL Delivery Vehicles, or SDVs, have come in at least two operational forms: the Mark 8 SDV, which can transport SEALs, and the Mark 9, which leveraged two Mark 31 or Mark 37 torpedoes to engage surface vessels prior to its retirement. Two new SDVs are already headed for operational service, with the Mark 11 Shallow Water Combat Submersible (SWCS) slated to replace the Mark 8 and the more broadly capable Dry Combat Submersible (DCS) expected to offer even greater capability.

“SDVs aren’t sexy. They are uncomfortable and a lot of work, but they fill a critical and unique capability. The guys that do get to work with the SDVs are a strategic national asset,” one former Navy SEAL told Sandboxx News.

But despite the incredible capability offered by these submersible platforms, they come with some significant setbacks. The Mark 8 SDV and its successor, the Mark 11, are both “wet” submersibles, meaning the occupants are exposed to the water (imagine driving an underwater convertible). This reduces weight and power requirements, but limits how long SEALs can travel in cold water without suffering physically adverse effects. Another significant limitation of the Mark 8 is its operational range; once deployed, the Mark 8 SDV can travel a maximum of just 18 miles with a SEAL team onboard.

While figures for the Mark 11 have not been released, it likely won’t offer a massive increase in range over the Mark 8. The much larger Dry Combat Submersible (DCS) can carry two crew members and eight SEALs, twice that of the Mark 8 or 11 SDVs, and because the crew compartment is “dry,” its operational range isn’t limited by the survivability of its occupants in cold waters. However, its relative size, mobility, and range remain limiting factors in where and how it can be employed.

The idea of using submarines to deploy aircraft has been around as long as submarines and aircraft. The British sank one of their M-Class submarines before World War II attempting to add an aircraft hangar to it, the French carried foldable planes in their Surcouf submarine cruiser in the ’30s, and in the 1950s, the United States developed the AN-1 submarine aircraft carrier design, capable of carrying eight fighters within its hull.

All of these efforts, for one reason or another, found their way to the scrap heap, but the idea of combining the stealthy characteristics of a submersible with an aircraft’s ability to cover ground quickly has remained prevalent to this day.

The challenges associated with the premise, however, are sizeable. An aircraft is inherently low-density, as weight is a constant concern for airborne platforms. Submarines, on the other hand, are incredibly dense–as dense as the water they’re submerged in. Airplane fuselages are likewise designed with weight in mind and could never survive the pressure of being completely submerged in a hundred feet of water, while submarines have incredibly strong hulls that are too heavy for most airborne applications.

A report published by the Navy in 2010 called the “Submersible Aircraft Concept Design Study,” penned by engineers Rick Goddard and Jonathan Eastgate, aimed to determine the feasibility of an aircraft that could easily transition from flight to operating on the surface of the water, and then to operating below the surface with these challenges in mind. The impetus behind the concept, of course, was finding a way to get special operations troops, referred to as Special Forces within the study, into and out of contested areas under a shroud of secrecy. In practice, the premise simply takes the submarine aircraft carrier concept and removes the carrier. Just as seaplanes were intended to eliminate aircraft’s reliance on airstrips, flying submarines could operate secretly in a maritime environment without a submersible aircraft carrier to support them.

It was with this premise in mind that DARPA published a request for designs in 2008, outlining a list of requirements a flying submarine would need to be able to meet in order to be an effective weapon in a near-peer conflict.

The Navy’s 2010 study largely leveraged DARPA’s outlined requirements, or Concept of Operations, for a submersible aircraft aimed at transporting special operators. The first was obvious: that the flying submarine could be deployed from existing Navy or auxiliary platforms. The vehicle had to be able to land and take off unassisted from the surface of the water, with an in-flight range of 400 miles or more. It needed to be able to transit at least 12 miles once submerged, and loiter for up to 72 hours while hiding from detection.

Perhaps most importantly of all, it also had to be able to traverse those same 12 miles beneath the waves and 400 in the sky on the way back, as well.

In keeping with DARPA’s own efforts, the U.S. Navy Special Warfare Center and Office of Naval Research used the same requirements in their study. However, in order to emphasize real-world applications, they further incorporated the requirements that the vehicle must be fully submerged during its 72-hour loiter time, and must be able to complete the entirety of the mission without refueling.

The Navy Came Up With Two Flying Submarine Designs

The study determined that a flying-wing/blended-body design was best suited for managing the rigors of both flight and operating beneath the surface of the ocean. So, the Navy set about creating two potential flying submarine designs that took similar, but slightly different approaches to solving the litany of challenges before them.

The first design, dubbed Variant 1, had a 92-foot wingspan and a total weight of 37,000 pounds. It was 36 feet long, could carry a 750-pound payload, and cruise at speeds of 200 miles per hour while airborne. The second design, logically called Variant 2, was similar, but boasted a larger 109-foot wingspan, a shorter overall length of 34 feet, and the same speed and payload capabilities, despite a slightly higher overall weight of 39,000 pounds.

Two turbofan motors would propel the vehicle while in flight and on the surface of the water, which would be sealed using torpedo-style doors while submerged to protect them from seawater. Submerged propulsion would be managed by a drop-down azimuthing pod with electric motor, capable of maintaining a speed of 6 knots.

Both variants of the flying submarine concept were to operate at depths of around 30 meters (98.4 feet) and be able to take off and land on specially designed inflatable floats.

While the numbers associated with the Variant 1 and Variant 2 designs were very similar, they differed far more on the arrangement of their respective crew compartments. In both arrangements, the quarters were quite cramped, so the team compared the internal volume of their cockpit to the long-duration flying Rutan Voyager, the first aircraft to fly around the world without stopping, and the Apollo capsule that brought astronauts home from the moon.

The Navy’s flying submarine offered 180 cubic feet of space for two pilots during potential missions of up to 84 hours in duration, which was less than the the 216 cubic feet allowed by the Apollo capsule for a longer 144 hour occupied duration and a third occupant, and much more than the 35 cubic feet offered by the Voyager for a 216 hour flight. Based on these comparisons, 180 cubic feet seemed feasible.