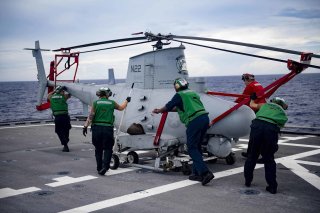 Here's What You Need to Know: Adding more drones, command and control technologies, and air assets to Amphibious Transport Docs, such as the Fire Scout has been a Navy goal for several years throughout its effort to prepare the fleet for more physically separated, yet connected fleet operations.

The Navy is now arming its amphibious attack vessels with what could be called a robot helicopter, an unmanned helo-like autonomous drone capable of vertical take-off from a ship deck.  The drone, which operates with radar detection and EO/IR cameras, can bring a new kind of support such as Amphibious Transport Docks, vital Navy platforms, often operating in Amphibious Ready Groups, which launch ship-to-shore Landing Craft Air Cushions (LCACs) to deliver weapons, equipment, and Marines for offensive attack operations from the ocean.

The Navy plans to deploy its Northrup Grumman FireScout MQ-8C drone as soon as this summer, having just completed an initial “fit check” of the drone onboard the USS Anchorage (LPD-23), an Amphibious Transport Dock, according to a Northrop Grumman statement.

The FireScout MQ-8C is a larger, upgraded variant of the existing MQ-8B FireScout drone which now flies from Frigates and Littoral Combat Ships.  The “C” variant is based upon the configuration of a Bell 407 small utility commercial helicopter but operates as a large, high-fidelity vertical take-off maritime sensors intended to hunt mines, search for enemy submarines, and of course, send back real-time video feeds to ships about threats and objects of interest otherwise beyond visual range.

Supporting ship-to-shore transport with autonomous unmanned Intelligence Surveillance and Reconnaissance drones brings new dimensions to amphibious attack, particularly in a more dispersed or disaggregated maritime attack formation. An unmanned, forward-operating aerial sensor able to connect quickly with its host ship could alert commanders about where there might be weaker coastal defenses or high-threat concentrations of enemy weapons and assets, without placing Marines or sailors at risk. Such an asset could bring paradigm-changing levels of survivability for approaching ship to shore craft, which could potentially be vulnerable to enemy fire while in transit.  The Navy’s LCACs or newer Ship-to-Shore Connectors can efficiently transport key forces to shore during an amphibious attack. While they can of course benefit from air support or ship-based suppressive fire, they are not well armed and could be targeted while in route to fortify landing forces. This mission is often the primary role of a Navy Amphibious Landing Dock which dispatches transport craft for amphibious landings.

Also, due to the rapid degree to which the Navy’s Distributed Maritime Operations strategy is coming to fruition, Amphibious Landing Docks are expected to increasingly perform more autonomous or independent missions separated from an Amphibious Ready Group to improve range and fleet survivability by disaggregating to leverage mission envelope, yet rely upon hardened long-range networking to sustain connectivity with other surface ships. More dispersed approaching forces not only reduce vulnerability to enemy fire but can also maximize the range and scope of a given assault, enabling Commanders to quickly benefit from large amounts of real-time information.

Adding more drones, command and control technologies, and air assets to Amphibious Transport Docs, such as the Fire Scout has been a Navy goal for several years throughout its effort to prepare the fleet for more physically separated, yet connected fleet operations.  A FireScout could launch from a Landing Platform Dock (LPD) and potentially relay images, video feeds, or intelligence information to a nearby Amphibious Transport Dock or other ships involved in an integrated mission.