The Navy SEAL Who Climbed Mt. Everest and Took on Somali Pirates 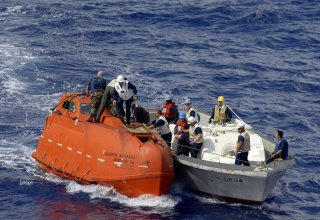 Here's What You Need to Remember: Moore “climbed Mt. Everest in 1989.” There is a lot left to the imagination in that one sentence, which probably leaves you wanting more. Well, that story also deserves a telling, as it is a fascinating one. Thankfully, this author has the details of the trip.

Moore, who retired from the U.S. Navy in 2014, is on the board of the aforementioned educational nonprofit and is an expert climber. Not mentioned in the article is that Scott Moore was the Director of Counterterrorism on the National Security Council (NSC) staff when the Osama Bin Laden raid was planned, and also served as the commanding officer of the Naval Special Warfare Development Group (commonly known as SEAL Team 6) when that unit executed the well-known and documented Captain Phillips rescue in 2009, off the coast of Somalia.

After graduating from the United States Air Force Academy in 1983, Moore laterally transferred to the Navy, was commissioned as an Ensign and entered Basic Underwater Demolition/SEAL (BUD/S) training, from which he graduated in 1984. Moore was later assigned as a platoon commander at SEAL Team TWO, where he also became the command’s lead climbing instructor. Moore was apparently already an adroit climber in his early twenties, which led to his assignment in that role at SEAL Team TWO. Decades later, Moore’s daughter, Sarah, has started a club called Keeping Women Wild, according to the Pilot article, and apparently inherited some of her father’s climbing passion — and skill.

Also mentioned in the article is that Moore “climbed Mt. Everest in 1989.” There is a lot left to the imagination in that one sentence, which probably leaves you wanting more. Well, that story also deserves a telling, as it is a fascinating one. Thankfully, this author has the details of the trip.

In 1989, then-Navy Commander Frank K. Butler, former SEAL officer at SEAL Team One, was a surgical resident in ophthalmology in the Navy’s medical corps. He was invited to be on the 1989 American Everest expedition to do high-altitude retinopathy research. He was eager to go but had very little cold-weather gear or advanced climbing experience. For that reason, Butler approached the then-commanding officer of SEAL Team TWO — Commander Norm Carley — to ask Carley to lend him some cold-weather equipment, which Carley dutifully agreed to do.

Butler also asked Carley what sort of altitude/cold weather operations information he might want Butler to bring back to SEAL Team TWO, given the command’s mountain warfare mission. Carley answered that they were all good on that front, but what he would really like would be to get SEAL Team TWO’s climbing instructor, LT Scott Moore, on the expedition. Butler said he would absolutely see what he could do on that front, and approached the expedition leader, Dr. Walt McConnell, who informed him that, lo and behold, they had an opening on the team.

McConnell subsequently invited Moore to go to Everest, but said that the SEAL Lieutenant would have to purchase his own summit permit from the government of Nepal (which cost somewhere between $5-10,000 at the time).

Butler mentioned this stipulation to Moore, who responded along the lines of, “No problem, I’ll sell my car if I have to, but I’m going on this expedition.”

In the end, the funding for Moore to go was provided by a donation. However, Moore was going to do whatever he had to do to get himself on that trip, and succeeded on that front, making the trip to Nepal with fellow SEAL Butler. Two Navy SEALs were thus on their way to the world’s tallest mountain.

On that particular expedition, there were a number of world-class climbers, including the climbing leader, Scott Fisher. As depicted in the book Into Thin Air, by John Krakauer, as well as in the 2015 movie “Everest,” Fisher later perished on Mount Everest, in 1996, during a particularly harsh snowstorm.

Despite the quality of the climbers on the team, LT Scott Moore was one of the best climbers in the group, according to Butler. As the team was preparing for one of its summit attempts, Moore came down with high altitude pulmonary edema and had to be taken down to a lower altitude for medical treatment. Despite the significant setback, which would have ended the expedition for many climbers, Scott Moore recovered quickly and got back up on the mountain.

As Butler remembers, Moore’s team was at Everest Camp Four (at 26,000 feet, and the last camp before the summit) and poised to make a summit attempt when — after a successful summit by the preceding team — one of the Nepalese Sherpas (guides who lead climbers up Everest) fell to his death on his descent from the top. The subsequent summit attempt by Moore’s team was understandably canceled because of the death.

Butler, meanwhile, had never purchased a permit, nor planned to summit the mountain and carried out his research at Everest Base Camp at 17,700 feet, as planned. He acquired valuable research data for Navy medicine and the ophthalmology field as a whole, not to mention a nasty case of diarrhea while at the base of the mountain. The two men then returned from the expedition and remain friends to this day.

Moore would later go on to become the commanding officer of NSW’s Development Group (NSWDG), and then the deputy commander of the Naval Special Warfare Command (SPECWARCOM), making him the second-highest-ranking officer over all SEALs in the Navy at that time.

Butler, meanwhile, would go on to become the command surgeon of the United States Special Operations Command (SOCOM), and would eventually come to be widely regarded as the “father of Tactical Combat Casualty Care” (TCCC) following more than 25 years of leading work in that special field of military medicine.

So, there was a lot packed into that single sentence in the Virginian-Pilot article about Moore and his daughter: “He climbed Mount Everest in 1989.” Now you know the rest of the story.

Frumentarius is a former Navy SEAL, former CIA officer, and currently a Captain in a career fire department in the Midwest. This article first appeared at Sandboxx.