The Navy SEALs are Embracing Diversity to Beat Russia and China 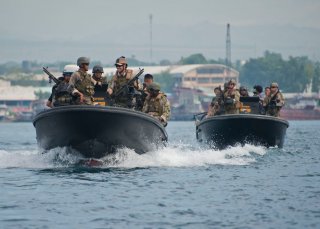 Besides the usual information that such standard presentations contain, Howard’s testimony included some gold nuggets that reveal how the SEAL Teams are preparing for this new era of renewed near peer conflict.

One of the biggest revelations, however, was the imminent creation of a new SEAL training command that will be the same size as a SEAL Team. This new Naval Special Warfare Assessment Command will be responsible for recruiting better-suited candidates for the SEAL and Special Warfare Combatant-Craft Crewmen (SWCC) communities.

The reason behind the creation of this subordinate command, Howard said, is to expand candidate diversity in the SEAL and SWCC communities and better reflect the composition of the American population. In conjunction with the Navy Recruiting Command, the Naval Special Warfare Assessment Command will plan, coordinate, execute, and sustain recruiting combines to target, engage, and attract underrepresented demographics.

Some of the major traits the new command will be looking for are cognitive ability, character, and leadership attributes. To better assess the best recruits, the new SEAL command will be using a similar model as that of the NFL’s “combines.” In contrast with the NFL version, which focuses mostly on physical attributes, Naval Special Warfare’s combines will concentrate on a series of physical and cognitive tests that will evaluate all candidates under the same conditions to determine who are most qualified for a SEAL contract.

“I don’t care about color, social and economic background, or religion. I just want solid dudes who I can rely on downrange,” a former SEAL operator told Sandboxx News.

“The Teams do a pretty good job at finding out who’s a turd. I don’t want to see more Black, Latino, or Asian SEALs for the sake of politics or just because they are a minority. I want to see more of them because they have met the same standards as everyone else and deserve to wear the Trident.”

This pivot toward more diversity among the SEAL and SWCC population fits within the nature of Great Power Competition (GPC) with near-peer competitors, such as China and Russia. Although GPC might result in a full-blown war, it doesn’t necessarily have to. And low-intensity, grey zone conflicts in third-world countries or regions, for example, Africa, are equally likely. The ability to deploy troops that will be better able to blend in with the local population is an advantage not many countries have. Indeed, the unique ethnic composition of the U.S. gives its military a competitive advantage against its competitors if employed properly.

“Down the line, this drive will benefit the SRTs [Special Reconnaissance Teams] and DEVGRU. These are the units to be in if you’re looking to do some really cool low-vis ops, and these are the units that are looking for the exceptional operator,” Sandboxx News’ Navy SEAL source explained.

“If that exceptional operator happens to be Black or Asian or have an Arabic background and knows the culture and can speak the language or the dialect, that much the better.”

GPC, in which states pursue influence, leverage, and advantages to secure their interests, includes all traditional and non-traditional policy tools in the economic, diplomatic, military, law enforcement, intelligence, space, and cyber domains. When it comes to the military, GPC can cover the whole spectrum of contingencies and be anything from deterrence to competition below the level of armed conflict to an officially declared war.

Related: SHOULD USSOCOM BE ITS OWN MILITARY BRANCH? A NAVY SEAL WEIGHS IN

Although SEAL Team 6 is part of Naval Special Warfare Command, from where it draws the entirety of its assaulters and majority of direct-support and support troops, operationally it falls under the secretive Joint Special Operations Command (JSOC) as one of the U.S. military’s direct action special missions units (the Army’s Delta Force is the other one).

Despite the tactical value of diversity within the SEAL teams, the Navy’s elite warfighting units are still 85% white, according to Naval Special Warfare Command in Coronado, which is a significantly higher percentage than the Navy at large, which is closer to 64% white.