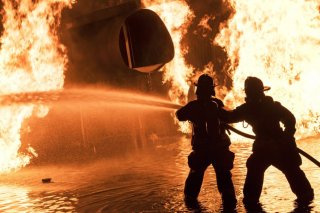 Here's What You Need to Remember: Arriving first at the scene of a fire, the officer who will command the incident has to size his enemy up quickly and accurately if he or she is to effectively defeat it with the minimal risk possible to the firefighters engaged. That means knowing the enemy: its location, the fuel it has to work with, the nature of the structure in which it is growing, how far it has advanced, and where it is going next.

The perennially-cited ancient Chinese General Sun Tzu, author of “The Art of War,” instructed all contemporary and future practitioners of warfare to “know thy enemy.” In a hundred battles, he assured them, “you will never be defeated.” Sage advice indeed, and as many times as it has paid off handsomely for history’s most successful military leaders, it has also been ignored and, as a result, has led to as many ignominious defeats.

On the battlefield, this maxim is fairly clear-cut. There are generally two sides to every conflict, and an effective commander aims to know his enemy’s political motivations, military strategies and tactics, the extent and limitations of his material resources, and the over-arching strengths and weaknesses of his forces.

On the fire ground, the enemy is different. While it is indeed a living, breathing, and advancing foe, fire possesses no intelligence nor motivation; that is, other than a relentless drive to consume all available fuel and air as it develops and grows to as large an inferno as conditions will allow.

Does this mean, because a non-sentient elemental force —fire — is the enemy of the firefighter, that a Fire Officer or Chief cannot truly know his or her enemy on their own battlefield? Absolutely not. Fire develops and acts in certain predictable ways, whether it be in a compartment (house, building, or other enclosed structure), a passenger vehicle, an airplane, a naval vessel, or in the wild-land of the western United States.

For the purposes of this article, because your author is a municipal firefighter and his number one threat from fire is in an enclosed structure, we shall focus on knowing our enemy within that particular battleground.

So what does fire want when heat, fuel, and oxygen come together in just the right way to give it life in the bedroom, attic, or kitchen of your house? Simply put, its only motivation is to grow and consume every last bit of fuel within that geographic space. Fuel is anything that will burn, which — given unlimited capacity for the fire to grow — will end up being pretty much any and everything. Sure, some fuels burn more readily than others, but eventually, without firefighters engaging it with water or some other method to rob it of heat, oxygen, or fuel, the fire will consume almost everything in that house.

The firefighter’s chosen weapon to fight this enemy is water. Lots and lots of water. Water removes the heat from the combustion process that is necessary for the fire to continue to exist and grow. It cools everything it wets and thus robs the fire of one of its essential resources. Without the heat, the fire loses the war. Firefighters can also rob a fire of oxygen, using carbon dioxide extinguishers, foam, or other retardants. This also removes a necessary resource from the enemy, and results in his total defeat. For a large and or fast-growing structure fire, though, water is still the weapon of choice. It is plentiful and effective and can be employed in the tens-of-thousands of gallons in a fight.

What about the tactics the fire employs to achieve its strategy of growing ever larger and consuming all in its path? A fire that starts in a corner of your room, in a wastebasket, will start in that basket and grow up and out. It will burn the fuel in that trash can, and grow large enough to advance up the wall, to the ceiling, or make a leap to the adjacent couch or bed. Like an army consuming the crops of the land it just conquered, the fire begins to consume the fuel that is the couch material, curtains, or bed. It gains strength like an enemy conscripting troops as it goes, growing larger and more destructive. And hotter.

As the fire grows, it releases what can be thought of as its air forces, in the form of smoke. Smoke is not some minor hindrance to sight, or some slight irritation to breathing like it is around an open-burning campfire. Smoke in a compartment filled with petroleum-based furniture and other materials (fuels) is deadly, combustible, turbulent, acrid, and hot. It will eventually fill the compartment from ceiling to floor as it banks down like the pitch-black force of nature that it is. That is, until it either mixes with air introduced through an opening and explodes violently outward, or ignites once a certain auto-ignition temperature is reached, resulting in a flashover which will consume in fire everything within that compartment.

Yes, smoke is flammable. And yes, if you are in that compartment when it flashes over, it does not matter if you are armored in the best fire gear available; the fire will win and you will lose.

Knowing the fire will employ these tactics helps the firefighter in his battle. In today’s firefighting operations, you have precious few minutes from the start of that fire in the room/attic/compartment to get water on the fire, or disrupt the combustion process before the fire evolves into a raging inferno consuming the whole space in which it began. If the ignition room has already flashed when you arrive, then you start the battle from there, and contain the fire to its present location and size. You engage the enemy where and how you find him. If the fire has involved the structure fully, and burned through the roof, for example, then you employ what we call a defensive strategy.

A defensive fire attack means that the firefighters have arrived to an advanced enemy that has grown to a size and strength that prevents the firefighters from engaging it inside the structure (and thus stopping it from taking the whole structure). In a defensive fight, the structure is lost. We have given it up to the enemy, and are fighting to save the adjacent structures. We will fight it in one structure, hope to keep it contained there, and save the other properties exposed to the fire.

Arriving first at the scene of a fire, the officer who will command the incident has to size his enemy up quickly and accurately if he or she is to effectively defeat it with the minimal risk possible to the firefighters engaged. That means knowing the enemy: its location, the fuel it has to work with, the nature of the structure in which it is growing, how far it has advanced, and where it is going next. Sun Tzu, in other words, was not just speaking to battlefield commanders when he said “know thy enemy.” He was also speaking to those who fight fire.