Navy Seals Loved the H&K P9S Gun. Here's How it Was Born. 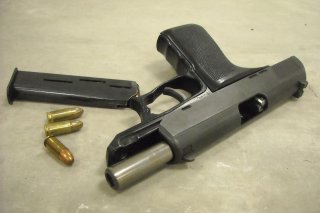 Key Point: It could fire right after exiting the water.

Like many German pistols before, it used blowback action, 9x19mm Parabellum caliber, and a single-stack magazine with a heel release. But it paired this with an unorthodox roller-delay mechanism, internal hammer system, and extensive use of polymer.

The resulting pistol didn’t see widespread adoption, but it was successful in niche roles and is considered to be very accurate. What drove H&K to make such an idiosyncratic pistol? What parts of its design can be seen in H&K’s handguns today?

In the 1960s, H&K had a series of successful weapons that used the Vorgrimler roller-delayed action. The G3 and MP5 are the most famous of these, seeing wide service with German military and police forces. But back then H&K didn’t really have a pistol to offer with their rifles.

H&K commenced the development of two pistols in the 1960s to fill the gap in their product line. The first to enter production was the HK4, a simple blowback pistol that could be converted between four small calibers. The second was the P9/P9S.

Since the P9/P9S was chambered in 9x19mm Parabellum, the pistol would need a locked or delayed action of some sort to have a reasonable slide mass. H&K’s Herbert Meidel, the chief technical designer of the P9/P9S decided to stick with what H&K knew and installed a miniaturized roller locking mechanism in the P9/P9S.

In many ways, the system is the same as that on the full-size H&K long arms, just adapted to a pistol. The primary moving part holds a roller-delayed bolt face (the slide on the P9/P9S and the bolt carrier on the long arms), locks into recesses in the barrel trunnion, which is attached to the barrel.

The actual firing mechanism of the pistol is also rather eclectic. While early prototypes had an external hammer, later prototypes and the final design placed the hammer entirely within the slide and frame, similar to the Sauer 38H of the World War II era.

The P9 utilized a simple single-action only mechanism with a simple firing pin block safety on the slide. The P9S, the double action (Spannabzug) added a cocking/decocking lever on the frame that allowed the user to decock the pistol by depressing the lever and pulling the trigger and cock the pistol by depressing the lever, similar to the 38H. The lever is also used as a slide release.

The pistol also featured a plastic recoil buffer which the front bottom edge of the slide would hit at the end of its movement, taming the recoil of the pistol even further. Large parts of the frame were built from polymer and the barrel used polygonal rifling, both innovations for the era. The pistol fed from a nine-round single-stack box magazine in 9x19mm, and seven-round box magazine in .45 ACP.

Prototypes of the pistol were made with a fully automatic mode and a shoulder stock, but these never reached production, probably due to the questionable utility of a full-auto mode with a single-stack magazine.

Very few of the original P9 were made, the majority of the production was of the P9S version. The pistol was adopted by a variety of local police forces across Europe and even Asia. Greece license produced the pistol under the name EP9S.

Despite its features, the P9S was overshadowed by a new wave of 9mm pistols that came about in the 1970s, following the 1972 Munich Massacre when German police forces found themselves outgunned with their .32 ACP Walther PP pistols. While called the “P9” by H&K designation, the pistol never saw wide enough adoption to be granted an official “Pistole” designation by the German government.

The new wave pistols that were trialed and accepted were granted the Pistole designations: The Walther P5, the Sig P220 (Pistole 6), and the H&K P7. Confusingly, the Glock 17 eventually received the Pistole 9/P9 designation from the German government.

The most famous users of the P9S ended up being the U.S. Navy SEALs. The SEALs needed a new suppressed pistol that could be ready to fire right after exiting the water to replace their earlier “Hush Puppy” S&W pistols from the Vietnam War era, which had a myriad of issues running suppressed, from unreliable cycling to cracking slides and a limited rate of fire from using a slide lock.

The Hush Puppy system also used a suppressor based on rubber wipes that only worked with FMJ ammunition. As counterterrorism and hostage rescue became important missions in the 1980s, SEALs started using high-performance hollowpoints on such missions (the legality of such being justified as terrorists were considered to be nonstate actors and not enemy combatants subject to the laws of war).

The design of the P9S made it uniquely suited for the kind of application the SEALs used it for. According to Small Arms Review, the single-stack magazine of the P9S remained reliable where double-stack single feed magazines used in the Beretta, Sig P226, and Glock would jam.

While the later H&K P7 might also have seemed ideal for the role, also featuring a single-stack magazine and fixed barrel, the “squeeze-cocking” mechanism was found to jam up under sandy water conditions.

Despite being a relative flop militarily, the P9S found significant success on the civilian market, with H&K making “sport” versions with barrel weights and target grips for targeting shooting due to the inherent accuracy of the pistol’s design. Some collectors say it’s simply the most accurate H&K pistol they own.

While the P9S missed out on wide adoption, many of its features and heritage would find their way into future pistols. H&K continues to use polygonal rifling to this day and expanded the use of polymer in pistols (decades before Glock) in the VP70. Recoil buffers, albeit in different designs became a hallmark of H&K pistols, being implemented in almost every H&K pistol since.

Image: HK P9S in 9 mm Parabellum. The P9S was adopted by the US Navy, German police and other military and law enforcement. The gun also comes in .45 ACP and 7.65x22mm Parabellum. 26 January 2010. Wikimedia/Rizuan.  Creative Commons Attribution-Share Alike 3.0 Unported, 2.5 Generic, 2.0 Generic and 1.0 Generic license.