This Navy Submarine Was Revolutionary. It Was Obsolete The Second It Sailed. 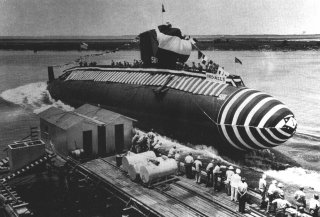 Here's What You Need to Remember: Nostalgia and reluctance to reinvent the wheel could not stop the inexorable march of progress in submarine technology: even as the Barbel-class boats were being laid down, naval engineers were making massive strides in nuclear propulsion technology.

The last of the U.S. Navy’s diesel-electric attack submarines, the Barbel-class submarines were among the most advanced boats of their time. But only three were ever built, as the Barbel-class was fast overshadowed by looming developments in nuclear propulsion technology.

When the USS Barbel—the lead ship in what would become a line of three Barbel-class submarines— was commissioned in 1959, it served as a showcase of some of the advanced submarine technologies of its time. The Barbel boats were the first serially-produced submarines to feature the Albacore, or ‘teardrop’, hull design, which boasts an impressive range of hydrodynamic benefits: among them, higher speeds, a smaller acoustic signature, and potentially the more efficient use of internal space. The USS Barbel’s reinforced, double-steel hull is the serially produced product derived from the experimental USS Albacore, which was the first submarine to feature a teardrop hull design concept.

The Barbel came in at a displacement of 2,146 tons, with an 8.8-meter beam and 66 meters length. Its front bow housed a sonar, with the submarine being among the first to feature a centralized controls array, conning tower, and attack center layout. This forward-thinking design translated into a formidable performance package. The Barbel class boasted six torpedo tubes for a total of eighteen torpedoes, a range of 14,000-19,000 miles, and was capable of a respectable (though hardly record-shattering) top submerged speed of twenty-five knots.

The only red mark on what is otherwise the Barbel’s potent specifications sheet was its standard diesel-electric propulsion system. At the time, Diesel boat technology was a badge of honor— literally. The alternatives to diesel were so technologically ripe and unreliable in their early incarnations that many in the U.S. Navy’s submarine force came to vastly prefer diesel technology, spawning the famous DBF pin: “Diesel Boats Forever.”

But nostalgia and reluctance to reinvent the wheel could not stop the inexorable march of progress in submarine technology: even as the Barbel-class boats were being laid down, naval engineers were making massive strides in nuclear propulsion technology. Building on the preliminary success of the USS Nautilus— the world’s first nuclear-powered submarine— the Skipjack-class successfully combined the hydrodynamic benefits of a teardrop hull with a S5W nuclear-powered reactor. This made the Skipjack-class not only markedly faster at a top submerged speed of thirty-three knots but gave it the virtually unlimited operational range that is standard to nuclear submarines.

The decision was made not to pursue further Barbel-class models beyond the three that had already entered service: Barbel, Blueback, and Bonefish. The former two were decommissioned following a decades-long and relatively uneventful service life, while the Bonefish was taken out of service after a 1988 fire that led to the deaths of three crew members.

As aptly observed by submarine expert H I Sutton, the Barbel line is perhaps best seen as a contingency class of advanced diesel-electric submarines, produced in the off-chance that the development of nuclear propulsion became a technological dead end. That proved not to be the case, with the U.S. Navy going on to acquire an entirely nuclear submarine force by the turn of the twentieth-century.