The Navy Is Upgrading Its Submarine-Launched Nuclear Missiles 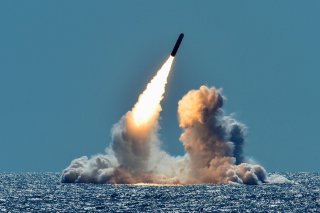 Here's What You Want to Know: The Navy is working with Lockheed on a number of key technical upgrades to both modernize and sustain the nuclear weapon. This has included work on the missile's Mk-6 guidance system, with a specific focus on the weapon's electronic modules.

While the Navy may ultimately engineer a replacement for its 1980s era Trident II D5, the missile is being modernized with improved electronics, firing circuitry and targeting technology to arm the emerging Columbia-class ballistic missile submarines.

A new, life-extended variant of the weapon, called the Trident II D5LE, was first installed in 2017, arming the fleet with an upgraded weapon slated to serve well into the 2040s and beyond.

The three-stage ballistic missile can travel a nominal range of 4,000 nautical miles and carry multiple independently targeted reentry bodies, according to Navy and Lockheed information.

As part of the technical improvements to the missile, the Navy has also been upgrading what’s called the Mk-4 reentry body, the part of the missile that houses a thermonuclear warhead. The life-extension for the Mk-4 reentry body includes replacing components such as the firing circuit, Navy officials explained. A new Mk-4A variant, according to Kristensen, has an enhanced fuzing and firing unit bringing improved targeting.

Navy and industry engineers have also been modernizing the guidance system by replacing two key components due to obsolescence – the inertial measurement unit and the electronics assembly, developers said.

Within the last several years, the Navy has acquired more than 100 Trident II D5 missiles in order to strengthen the inventory for testing and further technological development.

The "Bulletin of the Atomic Scientists" further describes the weapon -- "The Trident D5s carry three types of warheads: the W76/Mk-4, the 100-kiloton W76-1/Mk-4A, and the W88/Mk-5 warhead, the highest-yield ballistic missile warhead in the U.S. arsenal."

“By now, we estimate that all the deployed W76 warheads are of the new W76-1 type. The National Nuclear Security Administration just announced that it has completed production of the last W76-1,” Kristensen added.