The Navy Is Using Unmanned Systems to Protect Itself from Mines 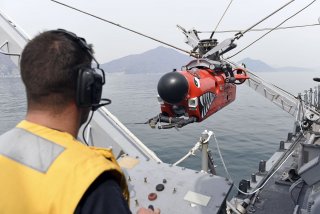 Here's What You Need to Remember: Mines are a persistent, if under-appreciated, threat to naval forces, accounting for far more destruction to U.S. Navy ships than all other forms of attack since the end of World War II.

Should an enemy submarine surface well beyond undersea or surface drone detection range and send intelligence to attack platforms - U.S. Navy platforms could be vulnerable in some instances. Fortified by targeting data from well beyond the horizon, enemy subs, planes and ships might, in this case, be well-positioned for a coordinated strike.

However, should an interwoven web of Navy surveillance assets track and share vital information, coordinated surface, air and undersea drones could sustain an unprecedented advantage -- and a new attack synergy could actually begin to transform maritime warfare.

Enemy mines, surface ships, small boats and submarines might be detected more quickly, but, perhaps of greater importance, cross-domain drone connectivity would completely change the sensor-to-shooter kill chain. With this in mind, Navy weapons developers have put this initiative on the fast track, with the hope of rapidly networking its fleet of surface, air and undersea drones.