The Navy Wants to Stockpile Destroyers in Europe 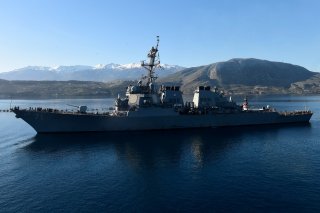 Here’s What You Need to Remember: If the Navy wants to contain Russia, it might want to keep as many destroyers in Europe as it can afford to do.

The U.S. military headquarters in Europe has been arguing for the U.S. Navy to give it more warships. And it looks like it’s winning the argument. U.S. European Command soon could add two powerful destroyers to the four it currently has.

The extra ships could help to deter Russia.

The debate concerns U.S. European Command’s naval forces in Rota, Spain. The administration of then-U.S. president Barack Obama in 2010 agreed to send four Arleigh Burke-class guided-missile destroyers to Rota as part of an agreement with NATO to extend U.S. ballistic-missile defenses across Europe.

Commissioned in the 1990s, the four 9,000-ton-displacement vessels are some of the older of the nearly 70 Burkes in U.S. service. But with their Aegis combat systems and nearly 100 SM-2, SM-3, SM-6 and Tomahawk missiles, they’re still among the most powerful warships in the world. And they’re among the few warships that can shoot down ballistic missiles in mid-flight.

The idea was for the Rota-based destroyers more or less to sail in circles on the Mediterranean Sea, ready to shoot down Iranian rockets. But Russia’s invasion of Ukraine in 2014 changed their deployments.

European Command, flush with billions of dollars from Congress’s European Deterrence Initiative fund, has deployed the ships across European waters, including on tense cruises through the Black Sea, where Russian ships, planes and submarines pose a major threat.

To that end, the U.S. Army has begun shifting some heavy forces, including far-firing rocket-launchers, back to Europe. Wolters wants more ships, too.

And it seems Congress is open to the idea. Senators Jim Inhofe and Roger Wicker, both of whom sit on the Senate Armed Service Committee, have championed the move.

But some Navy leaders oppose moving more ships to Spain. In 2018, Adm. Phil Davidson, then the head of Fleet Forces Command, complained that the Rota ships took resources from the Navy’s main forces that deploy from the United States, normally as part of aircraft carrier strike groups.

Davidson seemed especially irritated about the need to upgrade four extra Burkes as relief for the ships already in Spain. The fleet plans to send Carney, Donald Cook, Ross and Porter back to the United States for upgrades while replacing them with at least four other DDGs that carry the latest software and hardware.

“I can tell you that the four ships I’ve got to send next, I’m already pulling them out of strike groups to do the modernization they need to go over there," Davidson said. "Then I’m going to get four ships back that then are going to require their docking availability and some modernization as well.”

One recent study could help military leaders and lawmakers settle the argument. California think-tank RAND in a February 2020 study claimed that forward-deployed forces lying in wait near a potential conflict zone are better at deterring war than are surge forces that arrive as a crisis already is escalating.

If the Navy wants to contain Russia, it might want to keep as many destroyers in Europe as it can afford to do.