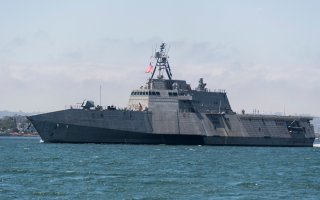 Here's What You Need to Know: The HELLFIRE has been combat tested for years as a helicopter-fired attack missile and has in more recent years been adapted for additional applications.

Should enemy helicopters, surveillance planes or armed drones be maneuvering to attack while circling above a U.S. Navy Littoral Combat Ship at seemingly unreachable ranges for the ship’s deck-mounted guns, commanders might be challenged to identify the best, fastest and most effective method to counterattack.

Now, enter the LCS deck-fired Hellfire Missile, long in development and successfully tested for the ship, which can target and “take out” air threats at ranges up to several km above or parallel to the ocean surface. The Hellfire, armed with a wide range of “energetics” or explosive materials, can hit otherwise tough-to-counter enemy air attacks.

Given this reality, the U.S. Navy is fast-tracking a broad effort to arm its fleet of LCS ships with deck-mounted Hellfire weapons, offering new options, ranges and tactics for maritime attack.

While the LCS does not have Vertical Launch Systems, Navy officials have told The National Interest that the HELLFIRE can fire from canisters beneath the surface of the ship. The weapon has been combat tested for years as a helicopter-fired attack missile and has in more recent years been adapted for additional applications such as ground-fired counter air missions. The Longbow Hellfire can use all-weather millimeter-wave sensing, semi-active laser guidance or inertial measurement to pinpoint its target.

While not quite an over-the-horizon attack weapon, the Hellfire could for instance draw upon laser painting or designating from drones or ship-based helicopters to light up targets such as enemy ships on the move.

As a way to make all of this happen, the Navy is acquiring as many as twelve Surface-to-Surface Mission Module (SSMM) launchers for the LCS as a way to arm the ships for coordinated attack. An interesting essay in SeaPower magazine, reporting that the SSMM was deployed on the USS Detroit in 2019, said each launcher houses a total of twenty-four missiles.

“A prototype launcher has demonstrated the capability to defend against multiple swarming Fast Attack Craft/Fast Inshore Attack Craft . During one test, a volley of six missiles were launched in rapid succession from an LCS, successfully destroying a swarm of six high-speed targets,” the SeaPower Magazine report says.

The SSMM achieved Initial Operational Capability on the Freedom-variant LCS in February 2019 and was deployed on USS Detroit in November 2019. Each launcher houses a total of twenty-four missiles. The Navy has just awarded Northrop Grumman a deal for two more SSMMs for the LCS fleet, bringing the total number to four.

A ship-launched variant is now being integrated with ship-based layered defense technologies to optimize its attack options against enemy aircraft and ships, particularly in a maritime combat environment potentially more difficult for helicopters to operate in.

The intent with this is to engineer the integration of the weapon within a ship-wide technical infrastructure such that fire control, sensors, interceptor missiles and weapons can operate in a coordinated fashion. This would include engineering the ship to operate as part of a broader ship-wide technical system connecting things like variable-depth sonar, deck guns, vertical take-off drones such as the Fire Scout. Moreover, this includes connecting the ship with small boat mission capabilities such as the eleven-meter Rigid Inflatable Boats, or RIBs. The Surface Warfare Mission Package also includes 30mm guns, a 57mm gun, .50-cal Machine Guns and a defensive interceptor missile called SeaRAM.