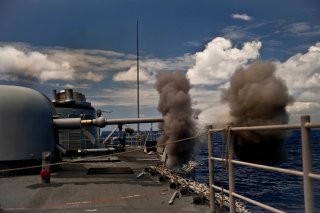 Here's What You Need To Remember: Due to its ability to reach speeds of up to 5,600 miles per hour, the hypervelocity projectile is engineered as a kinetic energy warhead, meaning no explosives are necessary. The hyper velocity projectile can travel at speeds up to 2,000 meters per second, a speed which is about three times that of most existing weapons. The rate of fire is 10-rounds per minute, developers explained at last years' briefing.

The Navy is considering accelerating developmental testing of its high-tech, long-range Electro-Magnetic Rail Gun by expanding the platforms from which it might fire and potentially postponing an upcoming at-sea demonstration of the weapon, service officials told Scout Warrior.

“The Navy is studying the pros/cons of forgoing a 2016 at-sea demonstration of the Railgun system, with an eye toward potential opportunities for accelerating testing of Railgun and the associated hypervelocity projectile.  Discussions are ongoing,” Matt Leonard, spokesman for Naval Sea Systems Command, told Scout Warrior.

Navy officials now explain that this planned at-sea demonstration may be delayed. This might help weapons developers further accelerate development of both the gun launcher and the hypervelocity projectile it fires. While plans for the weapon’s development are still being deliberated, one possibility may the integration of the projectile onto existing weapons platforms such as the Navy’s deck-mounted 5-inch guns or Army Paladin self-propelled howitzers which fire artillery.

As a result, postponing the at-sea demonstration may help Navy developers accelerate testing of both the gun launcher and projectile, enabling them to explore firing from a range of different platforms.

Defense Secretary Ashton Carter has indicated that the weapon’s high-speed deadly projectile could indeed be fired from some of these existing weapons’ platforms.

Despite some of these ongoing considerations, Navy officials emphasize that no formal decisions have been made and that postponing the demonstration is, at this point, an idea being discussed, Leonard emphasized.

In the upcoming demonstration, which may be postponed or skipped, is planned for later this year. In the upcoming at-sea firing of the weapon, the kinetic energy projectile will seek to hit, destroy or explosion at sea target from on-board the USNS Trenton, a Joint High Speed Vessel, service officials said.

The test shots, which will be the first of its kind for the developmental, next-generation weapon, will take place at Eglin Air Force Base, Fla.

During the test, the rail gun will fire a series of GPS-guided hypervelocity projectiles at a barge floating on the ocean about 25 to 50 nautical miles away, Leonard explained

The weapon will be fired against a floating target, in an effort to test the rail gun’s ability to destroy targets that are beyond-the-horizon, Navy officials said.