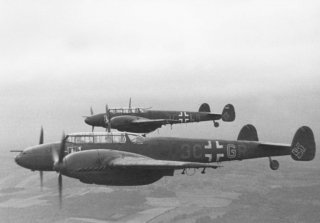 That message was emphatically delivered in 1944 by the U.S. P-51 Mustang, a single-engined fighter, that could fly 450 miles an hour, to a range of 1,600 miles, while still remaining highly maneuverable. Against marauding American Mustangs and Thunderbolts over Germany, the Bf 110 again became the hunted instead of the hunter.

The arrival of the Mustang also announced the bankruptcy of the heavy World War II fighter. American aircraft design genius (and in the Mustang's case, a British engine) created a fighter with speed, maneuverability, and range. It lacked the armament of a Bf 110, but so what? A Mustang was much more likely to be blazing away at a Bf 110's tail rather than the other way around.

The heavy fighter concept still lives today but in a mutated form. When we speak of the "heavy" F-15 and "light" F-16, we mean a highly capable but very expensive aircraft, versus cheaper but less capable light fighters.

Changes in aircraft technology and weapons have also removed the need for a World War II-style heavy fighter. In those days, fighters were only armed with cannon and machine guns, which meant speed and maneuverability were needed to get into a firing position on an opponent's tail. Today, an aircraft like the F-35 can sacrifice speed and maneuverability in return for sensors and air-to-air missiles that—theoretically at least—will give it the first shot. Where extra fuel once required a bigger aircraft to carry it, aerial tankers allow a fighter to enjoy a longer range without the bulk.

But the Bf 110 concept still resonates in illuminating how quickly a clever technological fix becomes obsolete. In the late 930s, when the RAF was still flying biplanes like the Gloster Gladiator, the Bf 110 must have seemed as cutting-edge as an F-22 compared to a Korean War F-86. Yet if German planners had really considered the problem, they might have realized that advances in aircraft and engine technology would result in single-engine aircraft with the Bf 110's range, but not its handicaps.

Michael Peck is a contributing writer for the National Interest. He can be found on Twitter and Facebook. (This first appeared in July 2016.)