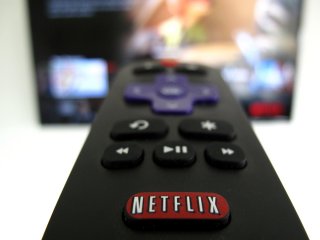 Netflix’s new series Cursed, based on the illustrated novel by Frank Miller and Tom Wheeler, is a retelling of the Arthurian legend – but like none you have seen before. The central character is not the young man destined to rule over Camelot and the Knights of the Round Table, the narrative that has come down through the centuries. In this version of the legends, the main character is a woman called Nimue.

In other tellings of the Arthurian legends, Nimue is usually a mysterious figure about whom little is known. She gives Arthur his sword and sometimes assists him, but she also (in Malory’s Le Morte d'Arthur) strips Merlin, Arthur’s adviser, of his powers and traps him under a stone.

In Cursed, we meet Nimue as a young woman who is a member of the “fey” – a pagan magical minority population. Nimue and other members of her tribe are able to pass as human – but other fey tribes have wings, or scales, or even tusks or antlers, making blending in with the human population much more difficult.

When her village is destroyed by the Red Paladins – inquisitorial figures who seek to cleanse the land of all fey in the name of the Christian god – Nimue begins a journey to return the sword of the first kings to Merlin, her mother’s dying wish. The sword is sought by King Uther and his rivals as a means of proving their right to rule. Along the way, she encounters Arthur, a young mercenary, who will eventually help her in her journey.

Nimue’s role is just one way in which this series upends the traditional cycle of tales. As a retelling of Arthurian legend, Cursed is almost unrecognisable – Nimue, who usually dwells at the fringes of the story (as the mysterious Lady of the Lake, for example) has been brought centre stage. Instead of giving the sword to Arthur, or even bringing it to Merlin as initially instructed, she decides to keep the sword and proclaims herself the Fey Queen.

While viewers of Cursed will encounter many familiar names from Arthurian legend, including Uther Pendragon, Merlin, Morgana, Gawain, and even Lancelot and Perceval, they may be surprised by the depiction of these characters in the series.

Uther is a whiny man-child dominated in the political sphere by Lunete, the queen mother. Merlin, meanwhile, is a jaded alcoholic concealing that he has lost his magical powers. Even Arthur, although good-hearted, is a liar and a thief who initially steals the sword for himself. He proves himself by recognising Nimue’s authority and serving her cause (rather than the other way around).

Yet the story of Arthur has always been open to adaptation. Malory’s Le Morte d'Arthur – although recognised as the source of most modern Arthurian retellings – was itself an adaptation of earlier Arthurian narratives. Writing during the Wars of the Roses, Malory, a prisoner of war, used the story of King Arthur not only to look back at a lost golden age, but also to reflect values and ideals he wanted to celebrate in his own time.

Each retelling of the story reflects the time in which it is being told as well as its aspirations. For example, the BBC’s series Merlin, which ran from 2008 until 2012, also took an untraditional approach by portraying both Arthur and Merlin as young men. Merlin, far from being a source of wisdom, is still learning how to use his powers and frequently makes mistakes. Prince Arthur is brave, but also arrogant – and, in order to prove himself worthy of kingship, must come to understand that nobility of character is not limited to those of noble birth.

King Uther, Arthur’s father, although a strong king, represents everything Arthur must learn to reject. He is intolerant of those who are not like himself (especially magic users) and determined to maintain the social hierarchy at all costs. It is Arthur and his young friends who must make Camelot great. Thus, the series promotes tolerance and acceptance and the importance of valuing others based on their merits rather than the circumstances of their birth.

In Cursed the emphasis also falls on the younger characters. They are the ones with the power to change the world and save it from the excesses of an older generation characterised by its intolerance. In the persecution of the endangered fey minority by the Paladins, we can see the dangers of religious fanaticism. But this discrimination is not limited to the Paladins, their actions are tolerated and sometimes even condoned by the wider human population, who regard the fey with fear and suspicion. As in our time, racism is not limited to a few extremists.

But what is perhaps most compelling about Cursed is its emphasis on female power and agency. The series is dominated by its female characters – not just Nimue, but also Morgana, Lunete, Lenore and Red Spear (who is revealed in the novel as none other than Guinevere, a leader of a band of Vikings who assist Arthur and Nimue), who all exhibit different forms of leadership.

This female agency seems particularly relevant at a time when leaders such as Angela Merkle, Jacinda Ardern, Mette Frederiksen, Silveria Jacobs and Tsai Ing-wen are all praised for their handling of the coronavirus pandemic in Germany, New Zealand, Denmark, Sint Maarten and Taiwan respectively. Likewise, there is much speculation about who Joe Biden will choose as a female running mate in the 2020 US presidential election. In such times, the story of a woman rising to power to save her people is more relevant than ever.

Arthur may live on in legend as the “Once and Future King”, but his story must also remain relevant for the present. Perhaps, now, more than ever, we need versions of our legends that make us see these old stories in new ways.