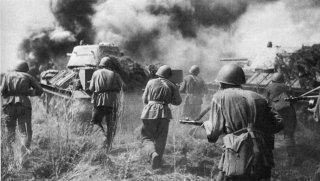 Here’s What You Need to Remember: Hitler’s hesitation in ordering the attack gave the Russians time to prepare that made it nearly impossible for the Germans to achieve a decisive victory. His losing his nerve and ending the battle in progress, withdrawing an entire Panzer corps in the process, sealed the doom of the battle and the war.

In 1939, and again in 1940, Adolf Hitler ignored the advice of his cautious generals and decisively ordered bold, creative plans to invade Poland and France, respectively. Hitler felt vindicated, as the German army conquered both nations in mere weeks. By the spring of 1943, however, stung by the crushing loss to the Soviet army at Stalingrad, Hitler’s indecision and loss of nerve at the Battle of Kursk doomed Germany to defeat. Germany would never again mount an offensive in the east.

As late as the fall of 1942, though, things looked bleak for Joseph Stalin, and it appeared nothing could save the Red Army from annihilation. Germany had invaded the USSR in June 1941 and, like an unstoppable machine, the German Wehrmacht smashed Soviet division after division.

After slowing down in late 1941, Hitler ordered a renewed two-pronged offensive — codenamed “Case Blue”—to begin in June 1942: Army Group A would move south and take the Russian oil fields of the Caucasus, and Army Group B would move towards Stalingrad.

After again achieving great success at the start of the offensive, Army Group B reached the outskirts of Stalingrad in September 1942, and for the first time ran into effective resistance from the Russians. Gen. Anton von Wietersheim, commander of the XIV Panzer Corps, reported to the Sixth Army commander, Gen. Friedrich Paulus, that he had insufficient troops to capture Stalingrad, and requested a temporary withdrawal to the Don river to rebuild strength.

Paulus refused, because Hitler had strictly forbidden any withdrawals, and relieved Wietersheim. Hitler’s refusal to consider withdraw would eventually result in the Wehrmacht’s loss at Stalingrad, the sacrifice of almost 250,000 German troops, and allow the Russians to launch a massive counteroffensive, called Operation Uranus.

Having been bled white in the bitter winter in Stalingrad, German troops were then forced into wholesale retreat against the fresh Red Army onslaught.

Army Group A was recalled from its drive to the Caucasus to try and stem the tide. It didn’t work initially, as the flood of Stalin’s troops swamped the tired Germans, who were being pushed back at every point along a 175-mile-long front. In January 1942 the Soviets captured Kursk and were on the verge of capturing the critically important city of Kharkov — which would have again trapped hundreds of thousands of German troops.

Arguably the finest strategic-thinking and effective battlefield commander in the Wehrmacht was Field Marshal Erich von Manstein. Hitler had placed him in command of German troops in an attempt to stem the tide of the Russian advance. Because the fuhrer was still shaken by the loss of the Sixth Army, Manstein got him to agree to a tactical withdraw around Kharkov in order to trap Soviet troops instead.

In fierce fighting, Manstein held firm on two “shoulders” and ordered a fighting withdrawal by the German troops in the middle. The Russians, who had been relentlessly pursuing the Germans for months, didn’t recognize the danger and took Manstein’s bait, following the withdrawing troops into the trap.

The Fourth Panzer Army then closed the gap and killed or captured Soviet armored divisions and a cavalry corps — including the destruction or capture of 615 tanks and one thousand other large-caliber guns. The German victory had inflicted a gashing wound on the Russian offensive, and both sides settled into a static position for several months.

The delay presented the Germans with an opportunity to launch a major counteroffensive of their own in which potentially hundreds of thousands of Russians could be crushed in a massive pocket — almost as big as all of England — around Kursk.

The Germans knew the destruction of the Red Army was no longer possible, but grounding them to the point they would accept a stalemate might be. Colonel-General Kurt Zeitzler, chief of the Army General Staff, convinced Hitler to approve the attack, Operation Citadel. Had the attack been started in April 1943, as Zeitzler preferred, the German attack would have had a real chance of success. But Hitler blinked.

Having just suffered the loss of the Sixth Army, he was hesitant to order another attack. Moreover, he believed that the introduction of Germany’s newest tank, the Panther, would tilt the advantage to the Wehrmacht. German Gen. F. W. von Mellenthin would later write in Panzer Battles that the Panthers were too new and too few, and wouldn’t make a difference. Moreover, it didn’t take the Russians long to figure out what the Germans were going to do.

“The Russians reacted to our plans exactly as would be expected,” von Mellenthin wrote. “They fortified likely sectors, built several lines of resistance, and converted important tactical points into miniature fortresses. The area was studded with minefields … They had converted the area into another Verdun.”

As it turned out, however, the Panthers that did make it to Kursk were too few to make a difference. Finally, Hitler settled on a date to begin the attack: July 4. “Independence Day for the United States,” von Mellenthin quipped, but “the beginning of the end for Germany.”

The decision would be catastrophic for the German army.

Having had three full months to prepare, the Soviets were ready and waiting for the attack. The Wehrmacht nevertheless fought with gallantry, viciousness and professionalism. The Russians, however, were no longer in awe of the Germans, had gained critical combat experience, and had the physical and moral ability to absorb enormous losses while continuing to fight. Hitler, however, lost his nerve when the fighting got tough and made the final fatal decision.

On July 10, Gens. George S. Patton and Bernard Montgomery landed allied troops on Sicily, threatening the German southern flank in Europe. Fearing the Allies would drive up Italy into Germany, Hitler ordered Operation Citadel to end, and the SS Panzer Corps redeployed to Italy. It was an absurd order.

There were already hundreds of thousands of German troops in Italy. It would take the Allies years to push through the mountains of Italy. It would take months to get it there, and one armored corps would not make a strategic difference in Italy. In the middle of the fight for their lives in the Soviet Union, however, that experience unit could have at least created the stalemate Zeitzler sought. Instead, the Germans were forced from the battle and pushed further back.

The final tally of the losses on each side would seem to have favored the attackers — the Germans lost 343 tanks while the Russians sustained staggering losses: 177,847 men, 1,600 armored vehicles and 460 aircraft. Yet the Soviets, with the assistance of American industrial might, proved able to replace all the tanks and aircraft in short order. The Germans, on the other hand, would never recover from the loss of those tanks and irreplaceable trained crews.

Had the Germans succeeded in grounding down the Russians while retaining their fighting strength, they still wouldn’t have won the war but might have succeeded in creating a stalemate. But Hitler’s hesitation in ordering the attack gave the Russians time to prepare that made it nearly impossible for the Germans to achieve a decisive victory. His losing his nerve and ending the battle in progress, withdrawing an entire Panzer corps in the process, sealed the doom of the battle and the war. Never again would the Wehrmacht mount a major offensive in the east.