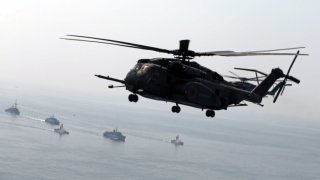 Here's What You Need To Remember: Countermine warfare has taken on much greater urgency in recent years, given the proliferation of inexpensive sea mine technology and the range of potential adversaries who could employ them.

The emerging technology, now being assessed in tests and combat-like scenarios by the Navy, is slated to deploy with Littoral Combat Ships and other surface vessels in the next few years. The AMNS, also called the Archer Fish, receives surveillance information from a range of different Navy systems before it reconfirms the target, lowers beneath the surface, and destroys the mine.

“Typically, the Archer Fish is cued from a towed sonar. It goes after bottom targets but not those that are found near the surface,” Capt. Danielle George, Program Manager, Mine Warfare, told Warrior Maven in an interview earlier this year.

The system consists of a Load Handling System (LHS) and destructor, or warhead. The LHS, which is used as an interface between the explosive destructor and common console on board the helicopter, can carry up to four destructors. The destructor is equipped with a sonar system, video camera and light to confirm the identified enemy mine; it connects with the common console through a fiber-optic data link, Navy officials said. The LHS contains all the data-processing hardware and software, developers explain.

“The destructor is negatively buoyant, has six degrees of motion, can maintain a hover position and can be operated in either automatic or manual mode. The destructor can monitor depth and relative distance from the bottom and has the ability to avoid bottom plowing. The destructor's position is determined by an Integrated Track Point II acoustic tracking system contained in the LHS,” Baribeau said.

The Navy’s reference to “choke points” seems to pertain to several current, highly visible hotspots known to present mine threats – such as coastal areas surrounding the South China sea and the much-discussed Strait of Hormuz in the Middle East. This waterway is recognized as a potential area for Iranian threats, such as swarming small boat attacks and sea mines. Many raise the question as to whether tensions with Iran could motivate a desire on their part to try to close or threaten the strategically vital and highly-trafficked “choke point." Detecting mines more effectively and at greater distances with systems such as AMNS, naturally, could massively impact the US Navy’s ability to respond to this kind of threat.

The abundance and sheer variety of mine threats can also make detection more challenging. Some so called “bottom mines” can be buried or shallow-water mines easily triggered by surface ships or submarines. Moored mines, however, often tethered to the ocean floor, can be found in deeper parts of the water column. They can linger below the surface or possibly operate at much greater depths to target deeper draft ships, according to a 2014 NATO essay called “Naval Mines and Countermeasures.”

Countermine warfare has taken on much greater urgency in recent years, given the proliferation of inexpensive sea mine technology and the range of potential adversaries who could employ them, according to a National Research Council and Naval Studies Board published text from 2001 - “Naval Mine Warfare, Operational and Technical Challenges for Naval Forces.”

Tracing the origins of Navy’s massively stepped-up mine warfare emphasis as far back as the Gulf War, “Naval Mine Warfare” cites a “growing realization that sea mines are readily available to potential US opponents.” The essay specifically cites Russia as a major supplier of modern mine weapons and states that more than 50 countries possess sea mining capability.

Interestingly, while written almost two decades ago, “Naval Mine Warfare” succeeds in anticipating several pressing strategic considerations now inspiring Navy thinking about modern countermine technology. For instance, the Navy’s growing emphasis upon disaggregated operations, which of course underscores the importance of countermine missions, is specifically cited in the essay.

“In the future, surface warships and submarines may be dispersed throughout the theater doing key task unit operations – strike, fire support, theater air defense – as opposed to operating primarily in close proximity to a battle group. Warships so employed will have to provide much of their own self-protection against various threats, including mines,” the Naval Mine Warfare paper writes.

In fact, the Navy’s Amphibious Warfare Strategy and evolving approach to surface combat specifically calls for an increased ability for ships to conduct a wider range of more autonomous or disaggregated operations. Instead of traveling primarily in Carrier Strike Groups or Amphibious Ready Groups, individual ships such as amphibs or the Littoral Combat Ship are increasingly equipped to operate more independently.

In fact, this approach is an essential part of the strategic calculus for why the Navy is replacing its fleet of LSD Dock Landing Ship amphibs with more LPD 17- Amphibious Transport Dock-like ships, such as the now developing LXR. The new LXR amphib, now under development, is being engineered with increased command and control, surveillance and aviation assets. Technological change, including the growing threat posed by long range enemy sensors and weapons such as anti-ship missiles, requires that many surface ships operate in a more dispersed or distributed fashion in many combat scenarios.

Disaggregated ships can both leverage advances in long range networking technology to remain closely connected to broader fleet operations, yet operate in a less aggregated fashion to present more dispersed or difficult targets for enemy attacks.

(This first appeared two years ago and is being republished due to reader interest.)